According to Ghana’s former president John Dramani Mahama, this is the country’s worst time since the Fourth Republic began.

Mr. Mahama said that the events in the most recent elections were the first to take place under the present administration as he described the alleged brutalities that marked the 2020 polls.

“Two years ago, for the first time in the history of our country, a President and Government unleashed armed men who brutally killed eight (8) innocent Ghanaians including a child during voting and results collation.

“In the last six years, Ghanaians have witnessed a reckless government that has taken a wrecking ball to our economy, leaving it in a very sorry state, rivaling some of the worst economies in the world,” the former President stated in a Facebook post-Thursday December 8, 2022.

He continued: “Our dear beloved nation, Ghana, is in a worst state today than at any time in the history of the 4th Republic — high levels of corruption, hardships due to bad economic and financial policies, hungry and angry people, loss of investments, no credible reforms etc.”

Mr. Mahama however has motivated Ghanaians not to throw their hands in despair adding that “we are a strong people. We are creative and innovative. The Ghanaian does not give up and we won’t give up.

“On behalf of the National Democratic Congress (NDC), myself as the 2020 Presidential Candidate, I want to thank all Ghanaians who two years ago sacrificed your time and went to the polls to vote for NDC’s Parliamentary candidates and me.”

All Ghanaians who took part in the election process were praised by the former president for their contribution to preserving our democracy.

“I again express our condolences to the families of all those who passed away as well as to the people who were harmed by the callous Nana Akufo-Addo regime” Mahama stated.

The NDC has promised to look into these state-sponsored atrocities and punish anyone proven to be responsible.

We’ll provide those who lost their lives or limbs the due recompense. 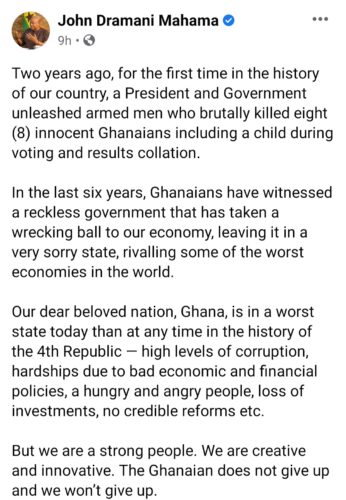 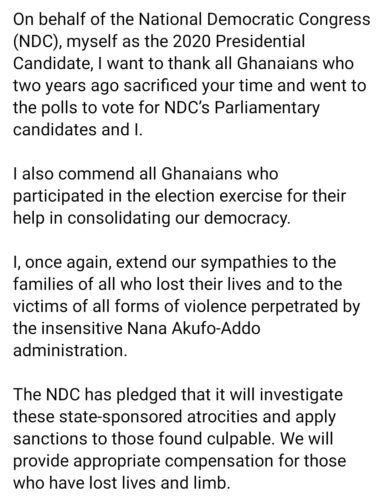