Workers in the public sector have received a Cost of Living Allowance (COLA) payment from the government in the sum of GHc485,000,000.00 (four hundred and eighty-five million Ghana Cedis).

The Controller and Accountant-Department General’s (CAGD) released a statement containing this information on August 29, 2022.

According to the press release, “the Controller and Accountant-General has paid the Cost of Living Allowance (COLA) to workers in Public Service Institutions in accordance with the approval given by the Ministry of Finance on 1st August 2022, following the Agreement signed between Government and Organized Labor on 14th July, 2022.”

Recall that the Trades Union Congress (TUC) requested that the government provide public sector employees with a 20% cost of living stipend during the May Day celebration this year (COLA).

The TUC claims that because of the current difficulty in the nation, this will improve the condition of public sector employees nationwide.

After that, some public sector employees threatened to resign if the government did not pay the COLA.

Following a tripartite committee meeting where it was decided that a 15% COLA would take effect on July 1, 2022, the strike was avoided.

The COLA, which represents 15% of the basic wage for 2022, was paid for the months of July and August, according to a statement released by CAGD. 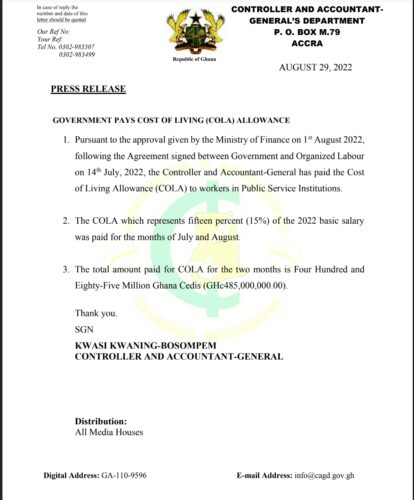