The Speaker welcomed the President of the ICC to Parliament and described the initiatives being taken to domesticate the Rome Statute’s instruments in order to fulfill Ghana’s commitments under international law. 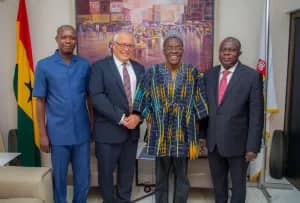 “I have written to the Attorney-General and requested that the draft domestic legislation on the International Criminal Court be submitted to the House without further delays,”Speaker Bagbin said.

He added that “there is no need to tarry with the bill when it is one of the urgent instruments we need to enact in our country”.

In order to domesticate the Rome Statute and give effect to Ghana’s commitments under the Rome Statute, Ghana drafted the International Criminal Court Law in 2016. However, the bill has not yet been passed.

As a result, the Speaker gave the ICC President assurances about his determination to ensure that the bill is passed before his term as speaker expires in January 2025.

He asserted that world leaders must recognize the advantages of a world order based on rules and exert every effort to promote the rule of law.

However, the speaker urged the ICC leadership to make every effort to dispel the myth that the court solely prosecutes crimes committed by African leaders, particularly in light of the evidence supporting this claim.

To address the numerous issues and criticisms the institution is experiencing, ICC President Judge Piotr Hofmaski called for a global initiative to broaden the court’s authority.

He stated that although the agency has made considerable strides in expanding its investigations and jurisdiction, there is still room for improvement.

He praised Speaker Bagbin and Ghana’s 8th Parliament for their efforts to assist the country’s judicial system.

As part of his three-day tour, the ICC President will give a public lecture at the Ghana Institute of Management and Public Administration’s (GIMPA) law faculty.