By mutual consent and with immediate effect, Cristiano Ronaldo will depart Manchester United, according to the club’s communications department.

The team wishes him and his family the best of luck in the future and expresses gratitude for his enormous contribution throughout his two stints at Old Trafford, where he scored 145 goals in 346 games.

Everyone at Manchester United is still committed to building on the team’s performance under Erik ten Hag and collaborating to produce results on the field.

Cristiano Ronaldo bid farewell to £16 million after it was announced that he will be leaving Manchester United immediately.

Although Sportsmail can confirm that Ronaldo’s departure was mutually agreed upon, United has not provided any compensation for the final seven months of his £500,000-per-week deal at Old Trafford.

On Tuesday afternoon, Ronaldo’s departure was made public as United issued a 67-word statement confirming the information.

Since Ronaldo’s shocking interview with Piers Morgan aired in two parts last week, United’s attorneys have been trying to rip it apart.

The following succinct statement was made public on Tuesday night: “Cristiano Ronaldo is to leave Manchester United by mutual agreement, immediate effect.”

‘The club thanks him for his immense contribution across two spells at Old Trafford, scoring 145 goals in 346 appearances, and wishes him and his family well for the future.

‘Everyone at Manchester United remains focused on continuing the team’s progress under Erik ten Hag and working together to deliver success on the pitch.’

Ronaldo released his own statement following the news, writing: ‘Following conversations with Manchester United, we have mutually agreed to end our contract early.

‘I love Manchester United and I love the fans, that will never ever change. However, it feels like the right time for me to seek a new challenge.

‘I wish the team every success for the remainder of the season and for the future.’ 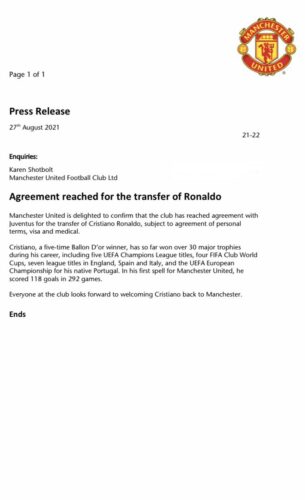 After criticizing the squad, the Glazers, manager Erik ten Hag, and his teammates in the interview, Ronaldo’s status at the club became unsustainable.

Ronaldo was let go by United after just four days because they wanted to get rid of him as soon as possible.

However, the club was hesitant to become involved in an unsightly legal dispute with one of their best players ever.

Ronaldo has burned his bridges at Old Trafford, and the Glazers, Richard Arnold, John Murtough, and Ten Hag have come to the conclusion that there is no turning back for him at the club.

They rejected the notion of further punishment for Ronaldo, who was sidelined and forced to practice alone last month after leaving the game against Tottenham and refusing to be substituted.