Mankessim murder suspects confesses of killing a woman from Buokrom-Police

The two suspects, Michael Darko alias Nana 1 and Christopher Ekow Clarke, have been found to have killed another victim, bringing the total of individuals they have confirmed to have brutally murdered to two, according to the police’s ongoing investigation into the Mankessim murder case.

Gloria Yeboah, a petty shopkeeper from Buokrom in Kumasi, was the second victim of murder. She was reported missing sometime in June 2022 after leaving her home in an effort to travel abroad.

On June 17, 2022, the suspects brought the deceased to Accra and transported her to Mankessim on the pretense of getting her ready for her trip to Holland.

The Police said that she was later slain by them.

Gloria Yeboah’s body has been discovered, and authorities have been able to contact her relatives, who have confirmed her identity.

According to the police, it is giving the family the help they need during these trying times.

Additionally, the police are pursuing a tip regarding a third victim who may have been killed by the perpetrators.

The results of the investigations to date indicate that the suspects have committed ritual killings.

They entice their victims, sometimes seeming to be able to assist them in leaving the country, and then they murder them.

As a result, the police have requested that anyone in the public who has interacted with the suspects or knows of someone who has, call the police at 0243809991 to help with the investigation.

The phone number is an investigation-specific temporary number. 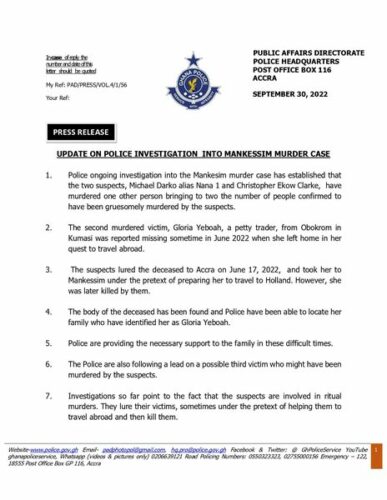 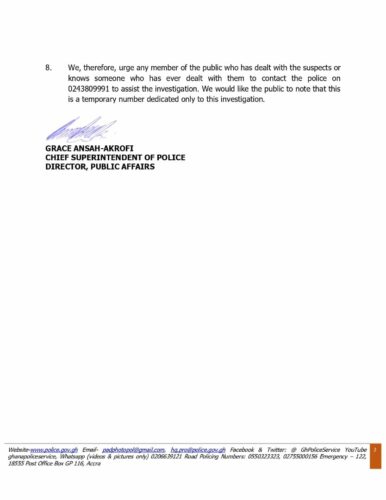