NDC commits to deal with party thugs and criminals; condemns attack on ransacking of the deputy general

The NDC leadership has stated that any NDC members involved in the thuggery that occurred on Monday, October 31, 2022 at its national offices in Adabraka will suffer repercussions.

On Monday, a gang of irate people dressed in red broke into the NDC’s national headquarters, made their way to Barbara Serwaa Asamoah’s office, and stole a pre-paid meter.

Following the incident, the party issued a statement bearing the general secretary’s signature, Mr. Johnson Asiedu Nketiah, in which it was claimed that after entering the Deputy General Secretary’s office, “the group’s spokesman addressed the crowd that was with him and threatened to deal with the Deputy General Secretary for allegedly installing a prepaid meter in her office.

“Leadership of the NDC wish to condemn, in no uncertain terms, this blatant act of thuggery and criminality and will take immediate steps to involve the law enforcement agencies to deal with the miscreants and their sponsors.”

According to the statement, the party vowed to “take further measures to identify everyone who entered the premises to carry out this heinous conduct and to subject them to the disciplinary consequences specified by the party’s constitution.”

“Any attack on a national official is an attack on the whole party leadership,” the statement said.

And any of those people who are party members will be treated impartially and fearlessly in accordance with the party’s guidelines. 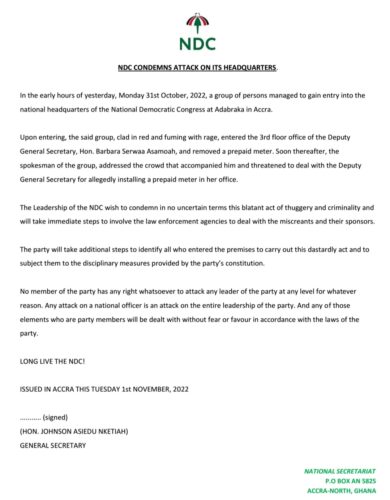 Previous We can’t feed ourselves -TTAG replies PRINCOF
Next Diesel per liter hits Ghc 23 as petrol sells now at Ghc 17.99

Spread the love According to vice president Dr. Mahamudu Bawumia, the country suffered a great …