The majority caucus in Parliament has been instructed by the leadership of the New Patriotic Party (NPP) to abstain from a planned vote of censure being requested by the Minority Caucus against Mr. Ken Ofori-Atta, Minister of Finance.

According to a statement released and signed by Justin Kodua Frempong, General Secretary of the NPP, the NDC Minority caucus’ request to have the Finance Minister removed from office is misguided and meant to thwart the government’s attempts to address the present socio-economic upheavals.

While the National Executive body recognizes the country’s current socioeconomic situation and the need for immediate corrective measures, it is the party’s firm belief that the demand of the NDC-led Minority Caucus is misguided and intended to thwart the government’s efforts to address the current socioeconomic upheavals.

The government’s negotiation team with the International Monetary Fund is led by the Minister of Finance, which is acknowledged by the leadership. 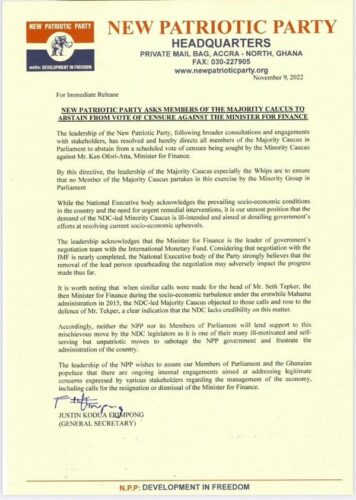