Pay our 8 months allowances before launching of YouStart-NABCO Trainees

The Deputy Finance Minister, Dr. John Ampontuah Kumah, has revealed that the government intends to switch NABCO into the YouStart programme effective July 1.

But in a sharp rebuttal in a statement from a group calling itself NABCO Trainees Association of Ghana (NABTAG) National President Dennis Opoku Katakyie have called on the government to stop the implementation of the YouStart in order to settle their unpaid allowances.

“The operational mechanism of the scheme, as long as acquisition of job readiness skills and experience are concerned, objectively qualifiers for us to commend government for envisioning the initiative. However, the prevailing circumstances pertaining trainees welfare do not cast a bright image over our prospects”

“Since the directive was divulged up until now, trainees have been dutifully reporting to work with no pay for the past 8 months which amounts to a serious National Security threat as a nation. We do appreciate the ongoing processes aimed at enrolling section of trainees on to the yet-to-be-launched YouStart program, but we are pleading with government to pay the arrears due the disgruntled trainees because we are suffering” the statement added. 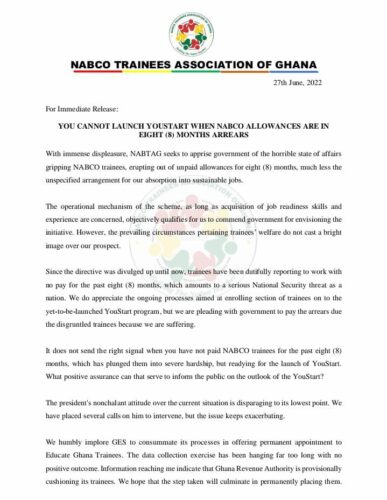 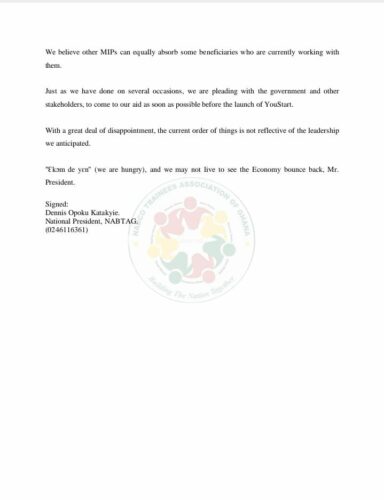