Presidency, Police perceived as most corrupt institutions in Ghana-Survey reveals

The Office of the President and the Ghana Police Service are thought to be Ghana’s most corrupt institutions.

The Ghana Armed Forces (GAF), religious authorities, and traditional authorities are the most dependable institutions.

The Police received a score of 65%, placing it at the top of the chart, according to an Afrobarometer research performed by the Ghana Centre for Democratic Development (CDD-Ghana). The Presidency came in second with a score of 55%.

Tuesday’s second round of dissemination forum in Accra featured highlights of the survey from CDD-Director Ghana’s of Research, Dr. Edem Selormey (July 26, 2022).

The report’s main conclusions demonstrated that, compared to 2019, perceptions of corruption among public officials and institutions had increased in 2022.The police, the presidency, members of parliament, judges, magistrates, and tax officials are those who are most commonly viewed as corrupt. 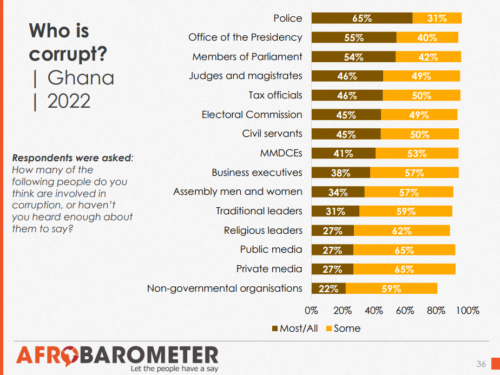 Afrobarometer is a pan-African, unbiased, nonprofit poll research network that offers accurate information on how Africans perceive democracy, rule of law, and quality of life.

Since 1999, eight survey rounds in around 39 African nations have been conducted.Surveys for Round 9 (2021–2022) are presently being conducted.

By offering high-quality public opinion data to decision-makers, policy advocates, civil society organizations, academia, the news media, donors and investors, as well as common Africans, the goal is to provide the people a voice in decision-making.

Each nation’s national partner carries out the survey.

The CDD-Ghana carried out the Afrobarometer Round 9 study in Ghana.

Previous 11 Menzgold properties, including 2 NAM 1’s Trasacco homes, are approved for sale by EOCO
Next Work ongoing at 87 sites of Agenda 111-Finance Minister