Ken Ofori-Atta, the finance minister, has been nominated by President Nana Addo Dankwa Akufo-Addo to serve as the ministry of trade and industry’s acting minister.

This comes after Alan Kwadwo Kyeremanten, the actual minister, resigned.

On January 5, 2023, Mr. Kyerematen submitted his resignation to the president.

It is anticipated that Mr. Ofori-Atta would hold the job up to the appointment of a formal minister.
On Friday, January 6, 2023, a communiqué bearing the signature of Eugene Arhin, Director of Communications in the Office of the President, made this announcement.

“The President has asked the Minister for Finance, Mr Ken Ofori-Atta, to act as caretaker Minister at the Ministry of Trade and Industry, until a substantive appointment is made”. 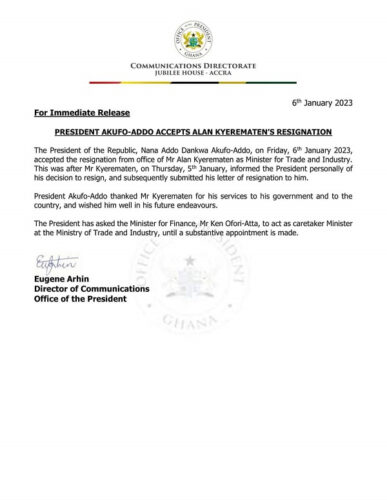 Previous “We all have roles to secure power in 2024” – Asiedu Nketiah to NDC supporters
Next Galamsey fight: Lands Minister lauds Ghana Armed Forces