In keeping with a promise, he made during his tour of the Ashanti Region last year, the President of the Republic, Nana Addo Dankwa Akufo-Addo, cut the sod for the beginning of construction of a 4-tier interchange at Suame on Tuesday, October 18, 2022.

When finished, he said, it will reduce the ongoing congestion around the Suame Roundabout and enhance urban mobility within the Greater Kumasi Metropolitan Area. 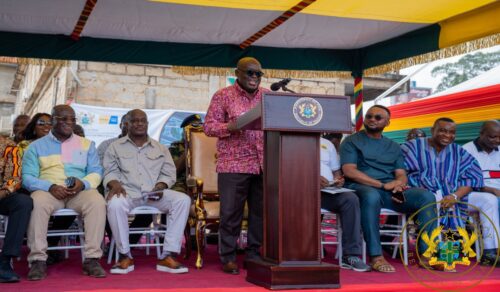 Rango Construction Company Ltd., a Ghanaian company, will take on the supplemental road component entirely. The Ministry of Roads and Highways, through the Department of Urban Roads, will be in charge of overseeing the entire project.

The Ministry of Roads and Highways and the contractors have been tasked by President Akufo-Addo to help ensure that the country gets value for money and that deadlines are strictly followed.

Previous “For those who speak ill about me; I will put you to shame” President Akufo-Addo to critics
Next Gov’t completes 295kms asphalt overlay of roads in Ashanti Region-Akufo-Addo