The General Secretary of the National Democratic Congress (NDC) Johnson Asiedu Nketiah, claimed that ever since he was a member of parliament, he has believed that President Akufo-Addo is hollow.

He claimed that Akufo-Addo failed to learn from former president John Dramani Mahama’s speech, which contained solutions and recommendations, because of his conceit.

He claimed that President Akufo-speech Addo’s on Ghana’s economy on October 30 was “nothing beyond the smoke” in a Facebook post.

“I have always insisted that President Nana Akufo-Addo is empty. I formed this opinion many years ago as an NDC Parliamentarian. He was representing the NPP in Parliament. Listen critically to him, and you will know he is full of smoke. Nothing beyond the smoke.

“President Mahama set the right tone in his brilliant address with solutions and proposals at the UPSA for Akufo-Addo to learn from. But arrogance and lack of capacity deprived him of the opportunity to drink from his predecessor’s fountain of wisdom,” he said.

In order to vote against the NPP in 2024, he advised Ghanaians to join the NDC.

“But there’s hope! We have elections 2024 to win to rescue Ghana from this incompetent and clueless NPP government that is determined to use foul means, including violence, to steal the outcome of the elections,” Asiedu Nketia posted on his Facebook wall. 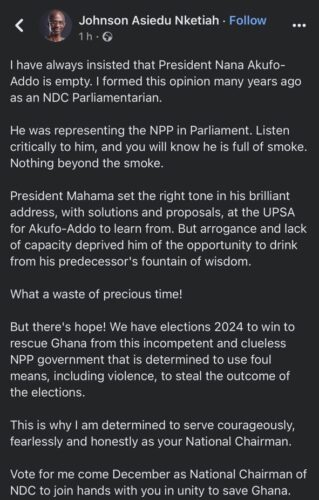