On Sunday, October 30, President Nana Akufo-Addo will address the nation on the economic difficulties the nation and its citizens are facing.

The speech will be broadcast on “GTV and on major television networks across the country” at 8 o’clock, according to the tweet. 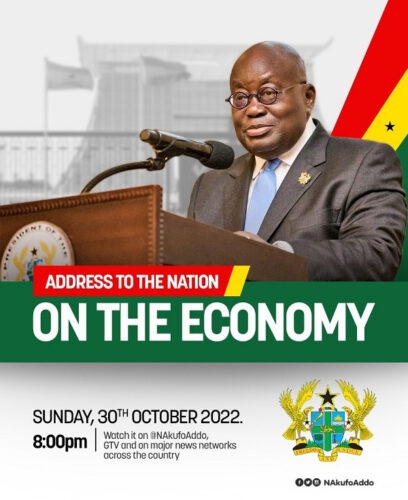 The President’s speech follows recent public unrest on the failing state of the economy.

Ghana’s economy is now struggling, which has caused a rise in living expenses and what some have referred to as a “galloping inflation.”

The local currency of the nation is likewise experiencing volatility when compared to the US dollar and other significant trading currencies worldwide.

Many Ghanaians have since lamented the situation and urged the government to swiftly address the matter, especially in light of graduate unemployment and the general suffering in the system.

In light of the current difficulties, some people may find solace in the President’s planned message.

Government officials claim they are attempting to improve the economy in the meantime.