Senegal defeated Qatar 3-1, their second consecutive defeat, and they are now in danger of losing at the group stage of their home World Cup.

The Middle East team fought bravely, but the Netherlands drew with Ecuador later on Friday, they will be eliminated with one match remaining (16:00 GMT kick-off).

Senegal, though, the reigning African champions, are active. 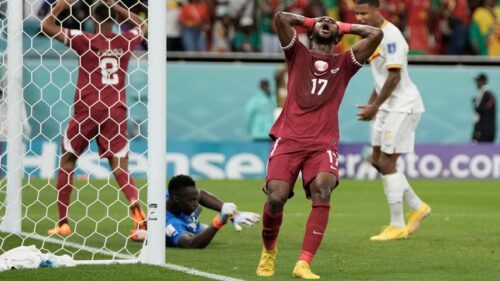 When former Bristol City striker Famara Diedhiou rose to flick home a beautiful header just three minutes after halftime, Qatar’s chances of bouncing back in the second period were crushed.

When Sarr tripped Akram Afif in the area during the first half, Qatar thought they should have been awarded a penalty. However, Antonio Lahoz only awarded a goal-kick, much to the ire of the home crowd.

Almoez Ali and Ismail Mohamad were both denied by incredible reflex saves from Chelsea goalkeeper Edouard Mendy, but he was powerless to stop Mohammed Muntari’s thunderous header.

After two games, Qatar was in quest of an equalizer, but Bamba Dieng’s goal deflated the home crowd and sent their side to the bottom of the group with no points.

Previous Ghana Cedi has lost 53.8% of its value in 2022-Finance Minister
Next 2023 Budget: Ato Forson advises Ghanaians to prepare for additional hardship