Residents of Kwahu Daah in the Kwahu West Municipal Assembly have issued a stern warning to the member of parliament for the Nkawkaw Constituency to stop trying to indulge in illegal mining, often known as galamsey, in the region.

Following social media reports that Member of Parliament Joseph Frimpong attempted to engage in illegal mining, tensions in the area have increased.

Galamsey Pit once murdered about 60 locals, according to several inhabitants who spoke with the media, and the community does not support illicit mining as a result.

The pit has been given the name “Kumaduosia” as a result of the tragic occurrence that claimed the lives of innocent people. 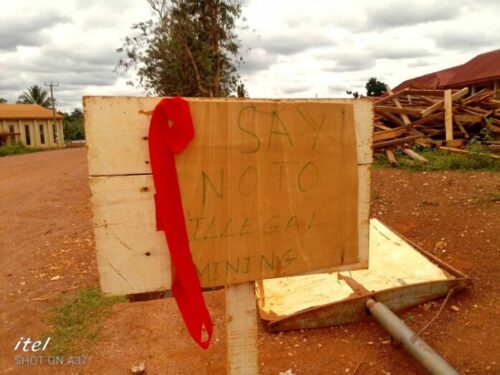 The Chief of Kwahu Daah, Nana Amakye Appah, expressed concerns about how the community mining project will effect their farming activities, which are their sole source of employment, last week in what appears to be community mining instead.

Any sort of community mining is not acceptable to us.

We can’t let our farms for cocoa, plantains, and cocoyams go to waste as we sold several bags of cocoa this season.

We adore farming and the revenue it provides.

The Municipal Chief Executive Lawyer Yaw Owusu Addo has been speaking with the Chiefs and locals in the most recent development to clarify the exercise and to emphasize that it is not illegal mining. He added that “there is the need to sit down with the various stakeholders to deliberate on the subject matter,”

However, some residents, who continue to believe that community mining is no different, have threatened that, given their lack of ability to influence the situation, they will order the land’s ancestors to defend them if their only water sources, “esuabena and momaatta,” are harmed by the mining activity.