Dancehall performer Shatta Wale has threatened to retaliate against his former “staff,” Bullgod, since he appears to be upset that Bullgod may have leaked information about the contents of his next album.

The “Kakai” hitmaker has given notice that he will disclose what he claims actually transpired in connection with the assassination of late artist manager Fennec Okyere.

Shatta Wale stated in a Facebook post that he is prepared to share with any court what Bullgod revealed to him on the murder of Fennec Okyere.

“Bull Dog, since you are bringing out secrets, you will tell Ghanaians what happen to Fenicks (sic) Murder!! And I am not joking about this time!! I am ready to tell the court about what you told me about you and your men and how planned that foolish act, get ready. This Akufo Addo won’t give you a murder (sic) chance to be on our streets!!! Watch how this ends!!! You can’t fight time!!!” Shatta wrote on his wall. 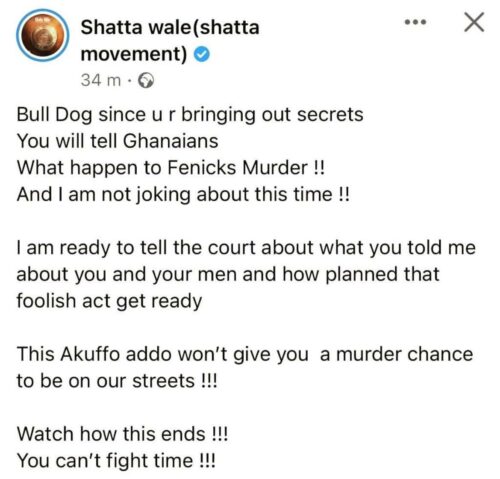 In their ongoing battle, Bullgod allegedly revealed the list of artists that would appear on the songs on Shatta Wale’s next album, “Gift of God” (GOG).

On Thursday, March 13, unidentified attackers assassinated Fennec Okyere, the controversial artist Kwaw Kese’s manager, at his Manet Gardens home on the Spintex Road in Accra.
At the age of 31, he passed away.

Bullgod, real name Lawrence Nana Asiama Hanson, was taken into custody by the Police Criminal Investigative Department after he passed away (CID).

As a suspect in Fennec Okyere’s killing, he was taken into custody at Kokomlemle, an Accra neighborhood.
Bullgod (then known as Bulldog), who frequently feuded with Fennec Okyere, allegedly threatened him in an interview, which is why this happened.

Bullgod was charged with conspiracy to commit murder by the police, but his plea was not accepted.
When then-Attorney-General Gloria Akuffo stated that the state was no longer interested in pursuing Bulldog for the purported murder of Fennec Okyere, the CEO of Bullhaus Entertainment was exonerated of all charges pertaining to the alleged murder in 2017.