The National Chief Imam’s Office has requested that the Inspector General of Police, the National Security apparatus, and the country’s Christian community summon Rev. Isaac Owusu Bempah to order and tell him to cease using the chief Imam’s name as a topic of his prophesies.

The Chief Imam’s office claims that Rev Owusu Bempah, the founder and head of the Glorious Word Power Ministries International, made remarks about the Chief Imam that are derogatory.

The contentious preacher is claimed to have remarked that other politicians including the National Chief Imam approach him to see into their futures.

The Chief Imam’s office issued a statement in response to the remark, claiming that it was unsatisfactory and that Rev. Owusu Bempah’s statements were nothing more than the product of his own imagination.
Rev Owusu Bempah should refrain from seeing His Eminence’s humility as weakness, the statement continued, in the sake of maintaining national cohesion, peace, and harmony.

The Chief Imam does not seek safety and success from charlatans on the pulpit, the statement said, despite the fact that he is a champion of interfaith cooperation and peaceful coexistence.

According to the statement, “His Eminence is guided by the divine word, ‘Allah is sufficient for any person who relies on Him.'” 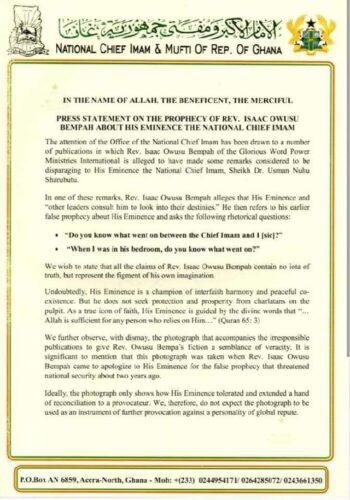 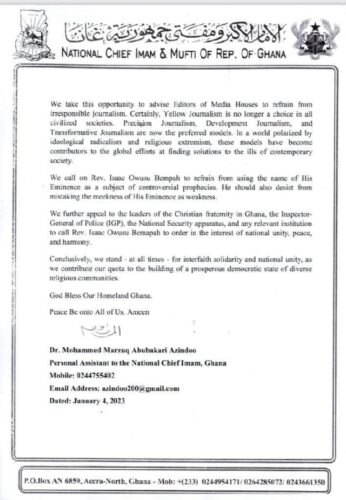