According to the Vice President, Dr. Mahamudu Bawumia, the mechanisms and policies being put in place by the Akufo-Addo administration are intended to aggressively accelerate national development while shedding light on the opaque spaces that foster corruption.

Dr. Bawumia lamented the crippling consequences of corruption on national development in a speech at the 59th Annual Session of the Ghana Baptist Convention on Tuesday, August 23, 2022, in Ejura in the Ashanti Region. He also reaffirmed the Government’s steadfast commitment to fighting corruption.

“One of the key hindrances in fulfilling God’s purpose is corruption. Corruption inhibits economic growth and affects business operations, employment and investments. It also reduces tax revenue and the effectiveness of various financial assistance programmes. The wider society is influenced by a high degree of corruption in terms of lowering of trust in the rule of law, governance and consequently the quality of life,” he stated.

“Corruption thrives in the very nature of the society that we have. It thrives in any society that is full of darkness.  So much so that when there is darkness so much is hidden; you cannot tell who is who.

“In a society where you have this type of darkness prevailing, when you cannot tell the identity of a person, then corruption can thrive. One can even go and borrow money from a bank and later change their name and then go to another bank to borrow.  You have no sense of where people are or finding where they are because address systems do not exist. So banks charge high interest rates.

“People who are supposed to collect revenues for government steal from government when cash is paid,” he continued. “People do not file their taxes. People try to register minors to vote and there’s general indiscipline in this type of system; because it is full of darkness there is no transparency and therefore corruption thrives.” 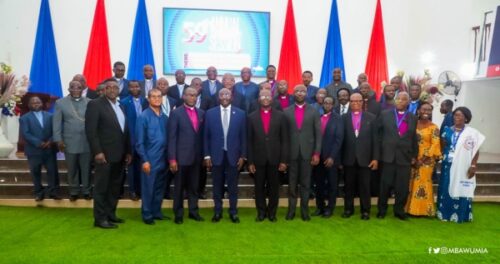 The Akufo-Addo administration decided to embrace digitization and integrate technology into the fabric of the country out of a burning desire to make access to public services simpler, more open, and free of corruption.

Dr. Bawumia claims that the preliminary results are impressive.

“This government is building a system that will enhance transparency, promote accountability, discipline, trustworthiness and enable inclusiveness.

“It’s not based on who you know and interpersonal relationships, thus promoting efficient public sector management, public services delivery and eliminating the incentives for bribery and corruption.

“You fight corruption with systems, you do not fight corruption with rhetoric; and so, in this regard we have been trying to put systems in place; we’re trying to identify everybody uniquely and that is why we’re issuing the GhanaCard. Every property has a digital address. Today there is no need to pay a bribe for your passport. No ‘goro’ boys are involved in passport acquisition; you go online you pay for it; and it can even be delivered to your house.

“Driver’s license is also very simple, it’s one of the most advanced systems that we have implemented in the world and therefore you don’t need any ‘goro’ boy to get a driver’s license.

“Through your mobile phone you can renew your NHIS membership card; you don’t need to pay anybody a bribe. You can top up your electricity on your mobile phone. The same goes with the digitized Registrar General’s office for the fast acquisition of one’s documents.

“Today, you cannot obtain fake Motor insurance certificates anymore. If I look at a driver’s license plate I can dial *920*57# and I will know whether that car is insured or not.”

While touting the successes chalked so far, Vice President Bawumia pointed out that the fight against corruption can only be won if we all contribute our quota, and called on all, including the Church, to partner Government in the fight.

“These are some specifics we can point to in our fight against corruption. But clearly, we have not finished the fight, and even though we have made progress, we still have more to do. To achieve this, we need to accelerate national development, and concerted efforts on the part of everyone would be required to build this nation.

“Through digitalization we are putting in place the systems for a disciplined, less corrupt, transparent, efficient, trustworthy and tax complying society. Let us all join this very important, national fight.”

Rev. Dr. Ernest Adu-Gyamfi, the outgoing executive president of the Ghana Baptist Convention and chairman of the National Peace Council, praised the government for taking steps to improve life for the average Ghanaian, especially the ongoing wide acceptance of digitalization in daily life.

In a related development, the Chief of Ejura, Barima Ozsei Hwedie II, presented 100 acres of land to the Ghana Baptist Convention for the construction of the Ghana Baptist University’s Ejura campus on behalf of his chiefs and elders.