The Ghana-Turkey Co-operation and Development Association (TUDEC), a global non-profit organization in collaboration with the member of Parliament for New Juaben South constituency, hon Michael Okyere Baafi has donated food items in support of the aged and other vulnerable people in Koforidua.

The package for each beneficiary includes 5kg of rice, cooking oil, a tin of Milo, tin tomatoes, mackerels, salt, vegetables and other edible items.

Speaking to the recipients on Sunday, 13, at Koforidua Apenteng Hall, Hon. Michael Okyere Baafi asked Ghanaians to support the government since the President is making sure that every Ghanaian has a steady supply of energy despite the global calamity. 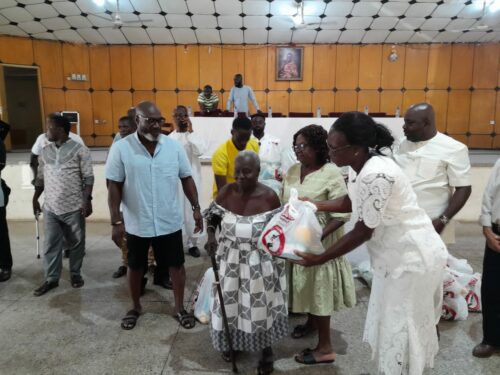 The MP argued that Ghanaians should applaud the NPP government instead because there has been no shortage of food or fuel in Ghana, and because flagship government initiatives like the ambitious Free Senior High School policy continue to be implemented despite the economic difficulties the nation is currently facing.

The administration, he said, is committed to working nonstop to revive the economy.

In a side-by-side interview, Hon. Michael Okyere Baafi explained to journalist Kaakyire Kwasi Afari of Afeema FM that the Social Intervention Initiative of TUDEC’s intervention was intended to help the elderly and most vulnerable people who would find it difficult to feed themselves and their families in light of the current situation and the coming days. 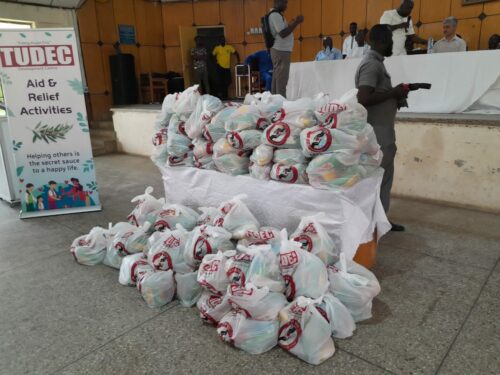 According to him, TUDEC provided over 100 packages of food to the less fortunate in order to assist them live at this critical time.

For his part, Mr. Cafer Tepeli, president of TUDEC, reaffirmed his organization’s commitment to doing everything in its power to improve conditions for the weak in Koforidua and throughout the nation.

He cited the Bible when he said that in these challenging times, the wealthy members of the community should look out for one another and be kind to the less fortunate members of society.

“If we are wealthy and do not offer kindness to these men and women, God will not be happy with us and will not even forgive us on the day of judgement so let’s be our brother’s keeper,” the president told Kaakyire Kwasi Afari.

He later mentioned that it’s important the government ensure food security and cut the cost of living for its citizens many Ghanaians are striving to survive the economic situation.

The beneficiaries expressed their appreciation to the MP and TUDEC for the gesture.

Lucy Darkoh, a widow who received the items praised TUDEC and Hon. Micheal Okyere Baafi for just decided to remember vulnerable people like her that may not be able to cater for themselves within this Christmas festive period.