The Boankra Integrated Logistics Terminal project, also known as the Boankra Inland Port Project, is a US$330 million undertaking that has been in the works for about 18 years. It has been promised to President of the Republic Nana Addo Dankwa Akufo-Addo that it will be finished by the first quarter of 2024.

On Sunday, October 16, 2022, when President Akufo-Addo paid a visit to the construction site, the concessionaire, Ashanti Ports Services Limited, a partnership between Afum Quality Limited of Ghana and DSS Associates of the Republic of Korea, made this information public.

Covering a total land area of 413 acres, the President was informed by the Concessionaire that “we are working to deliver this job within the schedule date. By the end of 2023 eighty percent (80%) will be done, and, by the end of the first quarter 2024, we will finish the project.”

The completion of the eastern and western railway lines on schedule, as hoped for by the concessionaire, will increase the Boankra inland port’s viability. 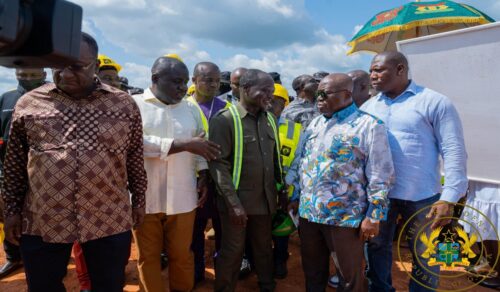 Since the time of the administration of His Excellency John Agyekum Kufuor, the second president of the Fourth Republic, the concept for the Boankra Integrated Logistics Terminal project has existed.

It faced numerous obstacles on the way to realization, the most major one being the NPP government’s fall from power in 2009.

Cutting the sod for the construction of the Port on Thursday, 5th November 2020, the President explained that the Boankra Inland Port project has been initiated to provide service to importers and exporters in the middle and northern parts of the country, and also to act as a major conduit for the efficient transportation of transit traffic to and from our neighbouring landlocked countries of Burkina Faso, Mali and Niger.

After completion of the Terminal, it will be fitted with an inland clearance depot, customs bonded and unbonded estates, commercial areas such as banks, offices and trading facilities, vehicle parking areas, light industrial areas, and an administration complex.

The Project will also offer significant employment opportunities for both skilled and unskilled labour during the two phases of construction and operation. Beyond the creation of jobs, there are other ancillary small and medium scale businesses that will be located within the enclave to support the operations of the Terminal.

“It is noteworthy that the transformation of the Ghanaian economy, from a raw material producing and exporting one, to an industrialised one, will be given a huge impetus with the coming on stream of this facility. Government’s commitment to establishing firmly the economy of Ghana on a solid path of industrialisation, with the view to delivering a vision of self-reliance, development and prosperity for all, is unwavering,” he added.

According to President Akufo-Addo, the concessionaire, Ashanti Ports Services Limited, a partnership between Afum Quality Limited of Ghana and DSS Associates of the Republic of Korea, has pledged to invest a total of $330 million for the completion of this project.

Furthermore, the concessionaire is required to design, engineer, finance, obtain, procure, build, run, and maintain the project, and then turn over ownership to the government after thirty (30) years.

“It is my hope and expectation that the Concessionaire will not renege on the confidence reposed in it, and will take all the necessary actions to deliver the project on schedule and on budget,” he stated.

The implementation of the Africa Continental Free Trade Agreement is one of the success stories of the continent’s economic integration program (AfCFTA).

The President emphasized that the AfCFTA’s goal is to increase trade between African nations, and that “this would be encouraged by the establishment of a competent and efficient transport system, especially while Ghana is hosting the Secretariat.”

In order to ensure that Ghana reaps the greatest benefits from the AfCFTA, President Akufo-Addo expressed optimism that “this project and other similar infrastructure projects, such as the development of the Keta Port, the Tema-Akosombo Railway Line, and the ongoing port expansion projects at Tema and Takoradi Ports, would make a positive contribution.”