According to Vice President Dr. Mahamudu Bawumia, 1,180 kilometers of road networks have been finished by the government in the Ashanti Region since 2017.

The Vice President stated on August 1, 2022, at the commissioning of the 100 kilometers of auxiliary infrastructure that had been repaired as part of the Kumasi Inner Ring and Adjacent Streets project at Nsenie in the Oforikrom Municipality, that many more roads still needed to be built, including the deteriorated Kwabre East roads. 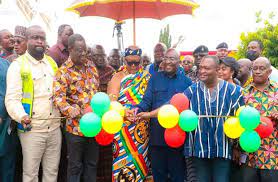 “The completion of this project is so important to the government since we shall be adding 100km of rehabilitated roads to the network in Kumasi.

“Apart from the roads we are commissioning today, let me state some of the works that the government is undertaking in Ashanti, under the Road Agencies under the Ministry of Roads and Highways:

Since 2017, 295 kilometers of roads in the Ashanti region have successfully undergone an asphalt overlay according to the Department of Urban Roads (DUR).

Partial Reconstruction of Selected Roads in Kumasi Lot1 (57km), the Kumasi Roads and Drainage Extension Project (90 percent finished), and the 100km construction of the Kumasi Inner City Roads, which entails the rehabilitation of an additional 100km of local roads in Kumasi, are all ongoing projects being carried out under the supervision of the DUR.