“In honour of the late Haruna Esseku, I have instructed the Minister for Roads and Highways to commence work on the construction of the Akoti Junction to Senya Beraku Road.”

The President requested that everyone present at the ceremony observe “a minute of silence in honor of the memory of a stalwart of the New Patriotic Party, Haruna Esseku, who was a former National Chairman of the party and a former Minister for Transport in Prime Minister Kofi Abrefa Busia’s Progress Party Government of the Second Republic” in order to pay respects to the late Haruna Esseku. 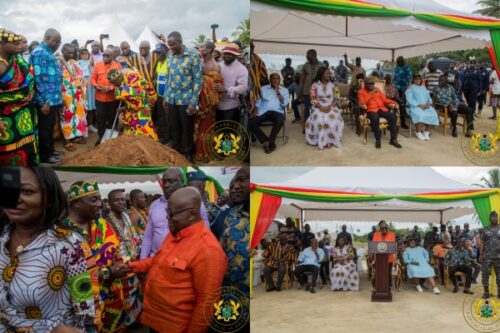 He also assured the crowd that the road will be finished by 2024, saying that Mr. Eugene Arhin, the presidency’s director of communications, “had done a very good job in fighting relentlessly for this road to be constructed, just as he did for the Bawjiase-Kasoa route.”

President Akufo-Addo added, “It is public knowledge that he has intentions of contesting on the ticket of the NPP in 2024. If he is successful in the NPP parliamentary primaries, Nananom, I am confident that he will do an excellent job as Member of Parliament for you, and I appeal to all of you to support him if and when that time comes. You have seen for yourselves what he is doing for Awutu Senya West.”

The President officially kicked off the building of the Bawjiase-Kasoa route before the commissioning of the cylinder manufacturing facility. 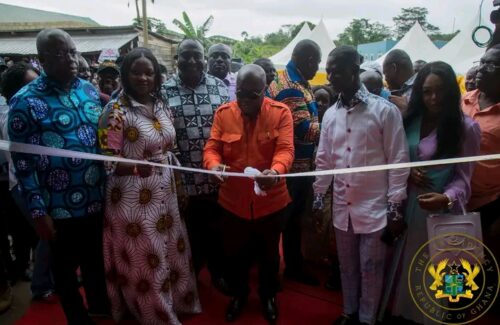 “In this constituency, we have already finished building the Bawjiase-Adeiso Road and the Bawjiase-Swedru Road under the Akufo-Addo Government.

In close proximity to here, in Ahentia, work is also being done on a District Hospital under Agenda 111”.

This important road project, which is anticipated to be finished in two years, would link the central area to the southern portion of the Eastern Region and relieve traffic on the Kasoa-Accra-Nsawam section.

Numerous petitions for the construction of that section have been made to succeeding administrations by local chiefs and residents throughout the years.

The project is being carried out by General Construction Limited and is being entirely funded by the Government of Ghana.

When the road is finished, it will increase economic activity in the area, which is already known as an industrial and agricultural region for producers of citrus and poultry.