Dr. Mahamudu Bawumia, the vice president, has demanded that Charles Adu Boahen, the minister of state for finance, be fired without delay.

Dr. Bawumia’s demand comes in response to Anas Aremeyaw Anas’ accusation against the Minister in his upcoming documentary, “Galamsey Economy,” which has not yet been broadcast.

Mr. Adu Boahen is alleged to have told the undercover investigators in the aforementioned program that Bawumia only need $200,000 tokens as an appearance charge before meeting with fictitious businesses.

According to the tainted Minister, the Vice President would need some positions from an investor for his siblings in order to gain his support and influence in starting a firm in Ghana.

“You mean, like appearance fees and stuff? I mean he, himself (the Vice President), if you give him some (USD) 200,000 or something as a token, as thank you, appreciation, that’s fine.

The only thing he has to be concerned about in 2020 is his campaign finances, according to Charles Adu Boahen.

In contrast, Dr. Bawumia refuted the accusations and demanded the Minister be fired in a Facebook post published today. “My attention has been drawn to a video by Anas Aremeyaw Anas (as posted on his social media handle) showing the Minister of State for Finance, Mr Charles Adu Boahen, apparently using my name, inter alia, to peddle influence and collect money from supposed investors.

“I would like to state that if what the minister is alleged to have said is accurately captured in the video, then his position as a minister of state is untenable.

“He should be dismissed summarily and investigated,” he insisted. 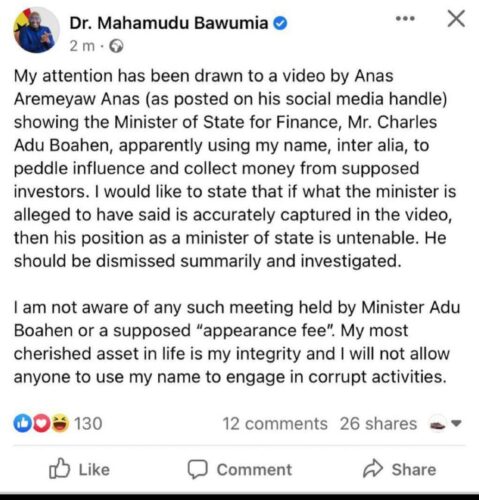