Sheikh Osman Nuhu Sharubutu, the National Chief Imam, has made enormous contributions to education and national development, according to Vice President Dr. Mahamudu Bawumia, who has called him “a gift to the nation from God.”

On Friday, August 5, Dr. Bawumia dedicated the Sheikh Sharubutu Mosque, a magnificent structure constructed by the National Chief Imam, as well as an Islamic School next to it, in Joma Ablekuma. He also paid tribute to the 103-year-old Sheikh Sharubutu.
“I am continually humbled by his copious and unceasing charity acts, and it has always been a pleasure to learn from him.His works are perfectly in line with the ideals of serving Allah, the community, and the nation “said Dr. Bawumia. 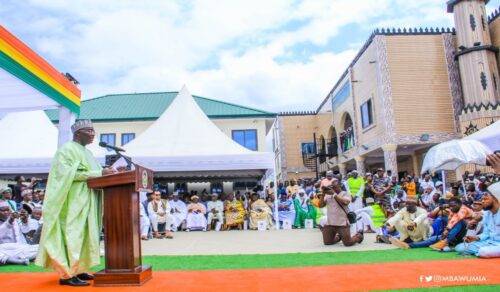 “The building of a school and the establishment of a Mosque devoted to the glory of Allah is yet another resplendent addition to an impressive array of beneficial projects commissioned and implemented by our venerated National Chief Imam,” he added.

“Also, the significance of establishing a Mosque in Islamic life can never be overstated. ‎In all Muslim communities, the Mosque, apart from being an exulted place of worship, also functions as a focal point of education, social welfare, community gatherings and allied forms of important social interaction,” he added.

The Vice President further praised Sheikh Sharubutu for his dedication to advancing social progress and selflessness.
“The Chief Imam does his good works from his undoubted commitment to society’s overall betterment. Sheik Sharubutu has always promoted and energetically worked for the balanced and spiritual uplifting of our people. His laudable works and necessary social interventions are never for personal gain or for fame.”
“I have absolutely no doubt that our Almighty Creator will reward him amply and deservedly for his extraordinary good works, such as the establishment of this beautiful Mosque and school for our Joma-Ablekuma communities.”

Dr. Bawumia stated that the government is aware of the enormous contribution Sheikh Sharubutu has made, particularly in the field of education, and he is both a friend and ally of the government.
“Education has always been the foundation for national development since it empowers young people to overcome their socioeconomic hardships and circumstances and to contribute to the creation of a better country.

“Government is in tune with the impactful role that education plays in the life of our citizens and the nation. This underpins the resolve and commitment of government to ensure that the barriers to education are not only eradicated but that the full complements of the education of our young ones are well catered for.”

“The Government and Ghana as a whole has friend and a gift from Allah, in Sheikh Usmanu Sharubutu, and he also has a friend in us.”