The three teacher unions that are on strike in opposition to Dr. Eric Nkansah’s selection as the next Director-General of the Ghana Education Service (GES) have received support from the Civil and Local Government Staff Association of Ghana (CLOGSAG).

CLOGSAG claims that the appointment of the Registrar at the Births and Deaths Registry represents a comparable progression.

“Similar appointments in the Civil Service and the Local Government Service are not conducive for industrial harmony.

“It is significant to note that the appointment of public officers vested in the president should be in accordance with the advice of the governing council of the service concerned, given in consultation with the Public Services Commission,” the Association indicated in a statement.

In order to bring about peace on the labor front, CLOGSAG encouraged the government to involve stakeholders in the announcement of appointments. 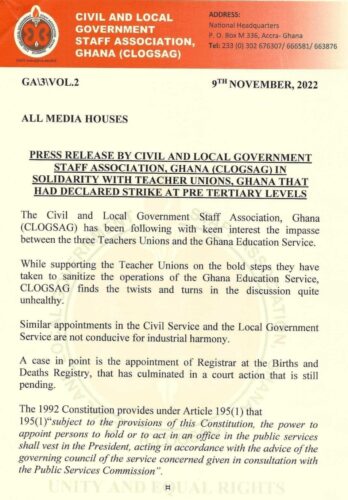 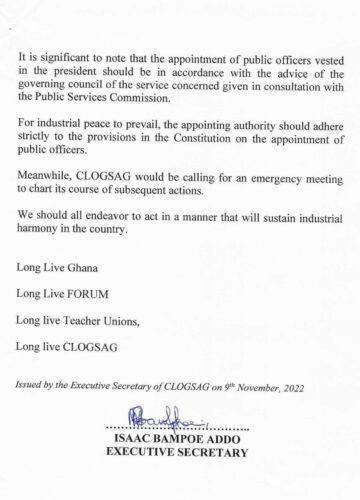 The recently appointed Director-General of the Ghana Education Service (GES), Dr. Eric Nkansah, is allegedly a non-professional pupil teacher, according to the three striking teachers’ unions.

After unsuccessful discussions with the Ministry of Education, the National Labour Commission (NLC) ordered the three striking teacher unions to immediately stop their strike.

On November 4, 2022, the unions announced a nationwide strike in protest of the government’s inability to revoke the appointment of the on time. However, the NLC ruled that the teacher unions did not adhere to the proper strike protocols.