In order to continue his team’s preparations for the FIFA World Cup in Qatar, Ghana’s head coach Otto Addo selected a 29-man roster for the next international friendlies later this month.

On September 23, 2022, the Black Stars will play Brazil, the five-time World Champions, in the opening test match at the Stade Oceane in Le Havre, France.

On September 27, 2022, Ghana plays Nicaragua in the second friendly in Lorca, Spain.

Mohammed Salisu of Southampton has been selected by Addo for the first time for the two games and might be making his White jersey debut.

Tariq Lamptey, a former player for Brighton and the England U21 team, has been added to Addo’s 29-man list and might make his Ghanaian debut soon.

Inaki Williams, a former young player for Spain who just moved to playing for the West African nation, is also mentioned.

Ransford-Yeboah Königsdörffer and Stephan Kofi Ambrosius, both of German descent, are also mentioned in the Black Stars squad to face Brazil and Nicaragua.

The 2023 Africa Cup of Nations qualifiers against Madagascar and Central African Republic were missed by Arsenal player Thomas Partey in June due to injury.

The sole domestic player named is Daniel Afriyie Barnieh of Hearts of Oak, who has been in outstanding form for the Black Galaxies in CHAN qualifying. 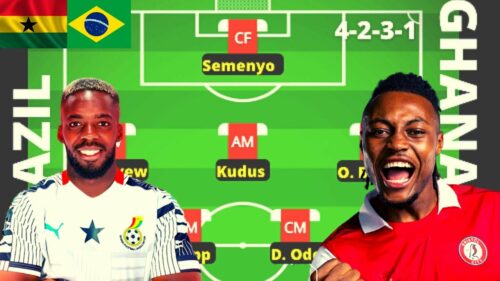