Any application going under the name of Aisha Huang has been rejected by the National Identification Authority (NIA).

The Authority claims that there is no entry for a person named AISHA HUANG in its National Identity Register (NIR).

“Put differently, the name AISHA HUANG does not exist in the National Identification System (NIS) database”, the NIA said in a statement dated September 6, 2022.

On Tuesday, Minority Leader Haruna Iddrisu made a statement about claims that Aisha Huang, the head of the Chinese “galamsey,” has a Ghana Card.

The senator expressed amazement at reports that the persecuted Chinese national who was detained for engaged in illegal mining had just lately obtained the Ghana Card.

Aisha Huang, a Chinese national described as a “galamsey queen or kinpin” by Ghanaians, was said to have a Ghana ID card. The National Identification Authority (NIA) responded to the reports.

In a statement, NIA clarified that the name Aisha Huang was not recorded in their database.

Aisha Huang was discovered to be in possession of a Ghana Card under the name Huang En after she was deported and then re-arrested for engaging in illicit mining activities in the nation.

The administration explained the widely circulated Ghana card image by stating that the registration in question was completed in 2014 under the name Huang En and was updated in 2016 and 2018 in Kumasi.

It claimed that in August 2022, a Chinese individual attempted to register a new non-resident Ghana card under the name Ruixia Huang. However, the system detected the attempt since the biometric information matched that of Huang En.

Huang En chose to renew with the old information and then go through the affidavit and gazette process later, after which she would then provide the documents for the update to be done, according to NIA in the statement. This was because she was unable to provide the necessary information to authenticate her new identity.

What is currently being contested and trending on social media is this card.

It must be stressed that having a Non-Citizen Ghana Card does not grant or imply citizenship in Ghana, according to NIA. 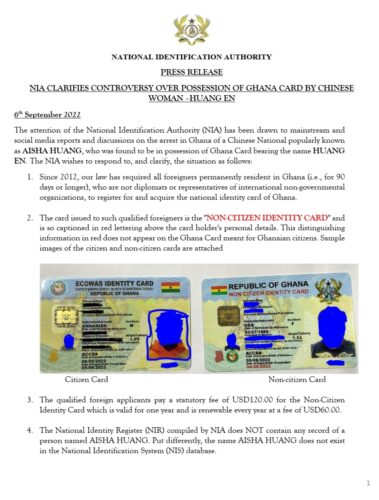 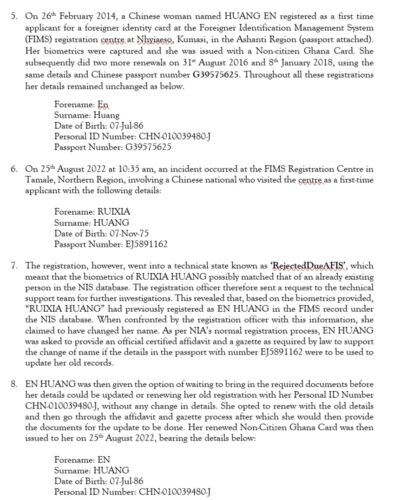 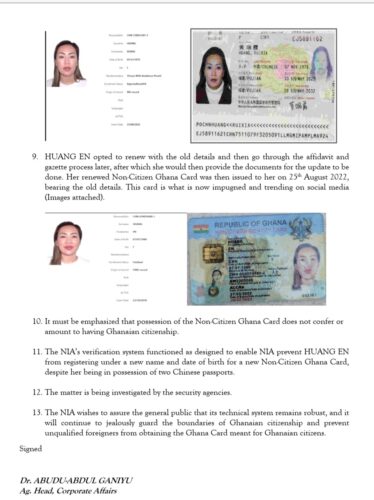 Previous Coach Otto Addo names squad to face Brazil and Nicaragua
Next Our economic problems are a result of corruption and cedi depreciation – Fmr. EPCG Moderator