The country’s economic condition would only become worse, according to former president John Dramani Mahama, if the administration continues to put off reaching a deal with the IMF.

After months of struggling with the economy and a cost of living problem, Ghana went to the IMF for assistance.

The former president described the economy as troubling in a tweet.

“Every day that goes by worsens the state of our economy.”

In order to produce a more predictable economic future, he urged the government to “act with greater alacrity to lock in a program with the Fund.”

The IMF team is currently engaging with government representatives for a total of 10 days as the formal negotiations for a Fund-supported program have started.

With the IMF, discussions have started on a thorough debt sustainability review for a US$3 billion rescue program.

On September 28, 2022, Finance Minister Ken Ofori-Atta announced that the government will expedite talks with the IMF to make sure that major elements of the program were included in the 2023 budget statement.

Some analysts have questioned if the IMF agreement can be finalized before the year is over. 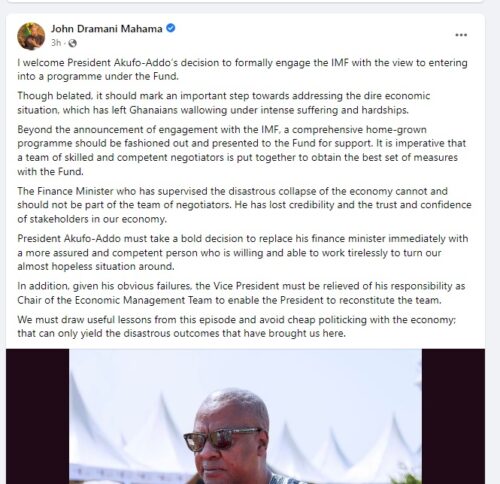