A 6-bedroom apartment has been left at the mercy of fire at Apatrapa of Kwadaso Municipality in the Ashanti Region.

The fire destroyed several properties worth thousands of cedis, no casualties were recorded.

Kumasi based radio station Otec FM Morning show dubbed ‘Nyansapo’ host Captain Koda in an interview with Mr Addai Nimako a tenant said, they were outside the house having some conversation and felt some unpleasant smell and before they realized a smoke was gashing out of his elder brother’s room and later call the Ghana Fire Service officials for help. 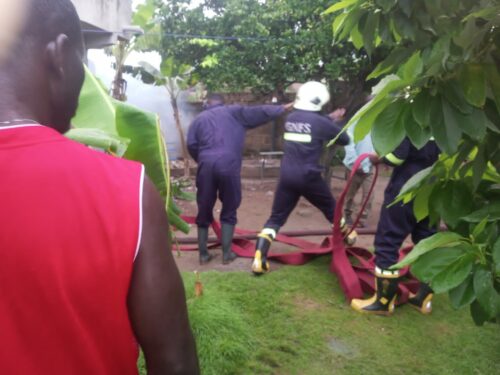 “upon seeing the smoke from the room, I helped in cutting the supply of the electricity power by switching off the meter and unplug the fuse but unfortunately the fire had gained grounds already” Mr Nimako stated.

He added that it’s a family house and seven people are currently occupying the rooms including his 57year old mum Maame Yaa Serwaa who built the house.

According to him it took intervention of Komfo Anokye Teaching Hospital Fire fighters to quench the fire but unfortunately all the 6 bedrooms that were stoked with their personal belongings had been burnt to ashes.

Mr Nimako said they are now sleeping in the open while others are putting up with friends and relations in nearby the fire had caused severe havoc in the entire family, as almost all the rooms in the house had been affected and therefore pleaded with authorities such as NADMO and NGO’s to come to their aid.

The Fire Service at the scene say investigations have commenced into the incident.