Gabby Otchere-Darko, a lawyer and communication strategist, is pleading with the minority to work with the majority caucus in parliament to adopt the 2023 budget.

The 2023 budget, according to NPP member Otchere-Darko, is vital and “must suffer a destiny similar to the 2022 budget and its revenue measures.”

In his opinion, failure to enact the 2023 budget “may utterly undermine discussions with the Fund.”

He wants the two sides to collaborate on “Ghana” as a result.

“Thursday’s 2022 budget is crucial. It can’t suffer a fate similar to the 2022 budget and its revenue measures. It could completely derail negotiations with the Fund if not passed. Critical to this are its revenue generation measures. We plead the NDC joins NPP in this for Ghana.” 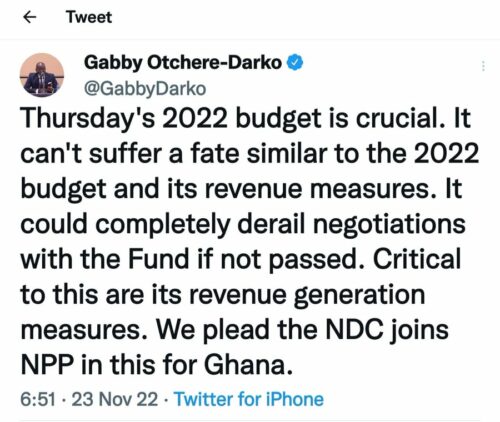 After meeting with the party’s leadership and council of elders, the lawmakers from the governing NPP have decided to attend the presentation of the 2023 Budget by Finance Minister Ken Ofori-Atta.

There were disputes among the Majority caucus about who should deliver the 2023 budget on November 24.

The Majority Caucus has decided to set aside all of their complaints and make it a point to attend, participate, and approve the government’s 2023 budget statement and economic policy following a crucial meeting on the subject on Tuesday.

In a joint statement, the NPP General Secretary Justin Koduah and Majority Chief Whip Frank Annoh-Dompreh said that “everyone has decided to regroup and revert to the previous stance asked by President Akufo-Addo.