Former President John Dramani Mahama has received a visit from Virginia Palmer, the US ambassador to Ghana.

During the visit, the former president and US ambassador spoke about issues that interested both Ghana and the US.

They also discussed the economy, investment in local companies, and the Electoral Commission’s animosity toward the opposition National Democratic Congress, as well as the condition of security in the West African region and its ramifications for Ghana (NDC). 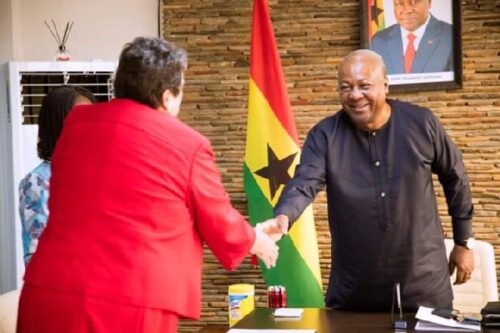 The country’s economic problems, according to the former President, “have been made worse by the government’s missteps, poor economic decisions, the collapse of indigenous banks and finance institutions instead of saving them, corruption, and the misappropriation of COVID-19 funds, which were shared to party officials.”

Following the International Monetary Fund (IMF) Program, Mr. Mahama expressed confidence that there would be more discipline in the government’s management of the economy.

He added that the confidence of Ghanaians would only return if they understood that the nation was participating in a program and that the government would not act as irrationally as it has in the past.

Previous Our economic problems are a result of corruption and cedi depreciation – Fmr. EPCG Moderator
Next I proposed Dr Antoinette Tsiboe-Darko myself but not Gabby – Justin Kodua