The Ghana Union of Traders Association’s (GUTA) strike has been called off.

This information is found in a news statement that was authored by Alpha A. Shaban, the Association’s General Secretary.

According to the announcement, the decision comes on the basis of a meeting with the King of the Ga State, Mantse Nii Tackie Teiko Tsuru II who has vowed to take the subject up to the proper authorities for urgent remedy.

The leadership of the Association was given the chance to meet with President Nana Akufo-Addo and provide him with their complaints and suggestions, according to the announcement.

“He [the President] then called for setting up of a working committee made up of the Ministry of Trade and Industry, National Security and GUTA, to swiftly come out with pragmatic measures to solve the challenges.”

The President has also stated that the majority of the Association’s suggestions will be taken into consideration during the current IMF meeting.

Since the Association’s leadership is still working to find an urgent solution, GUTA has thus urged the traders who took part in the walkout to reopen their businesses today.

Read the press release below: 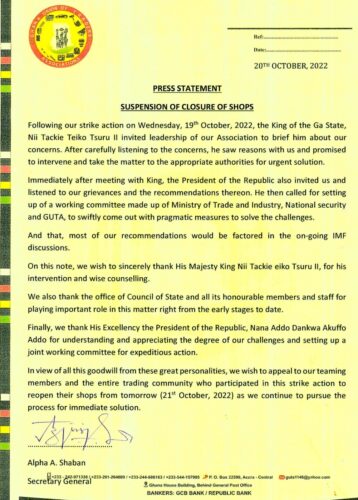