John Agyekum Kufour, the former president, has denied widespread media allegations that he invited the 98 New Patriotic Party (NPP) lawmakers who are calling for Ken Ofori-Atta, the minister of finance, to resign.

The statement was released after several media outlets reported on Thursday that the statesman had requested a meeting with the MPs in question in an effort to convince the lawmakers to abandon the #KenMustGo campaign.

The Office of John Agyekum Kufuor released a statement in which it stated, “We wish to bring to the general public’s attention that there is no truth to the aforementioned publication.”

“The office of the former President vehemently detests the developing trend in disinformation that mischievously seeks to draw President Kufour into issues that he has not commented on”, the statement added.

Both Charles Adu Boahene, the recently fired Minister of State in the Finance Ministry, and Ofori-Atta were called for to be fired by the majority of MPs.

Ghana is now seeking assistance from the International Monetary Fund, which led to early criticism of the proposal (IMF).

In response to appeals from members of his own party, President Akufo-Addo encouraged the lawmakers to refrain from acting until Ghana’s talks with the IMF were through.

President Akufo-Addo has previously rejected calls for Ken Ofori-Atta to be dismissed and declared that he will continue to support Mr. Ofori-Atta.

The NPP lawmakers have stated that they would not support the Minority’s motion of censure against the Minister who is under fire.

Read the statement from ex-president Kufour below: 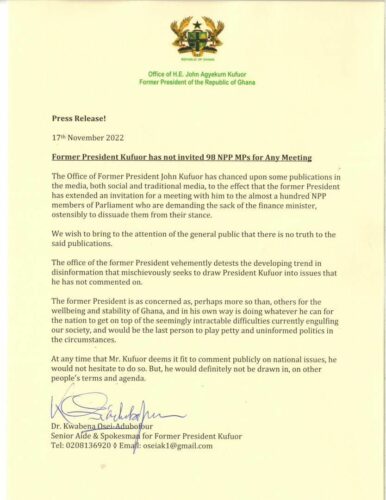