Residents of University Hall at the Kwame Nkrumah University of Science and Technology (KNUST) were celebrating hall week peacefully until things started to get out of hand.

Some University Hall of KNUST students, often known as Katanga, reportedly made the decision to march in front of the building of their longtime adversaries, Unity Hall (Continental). 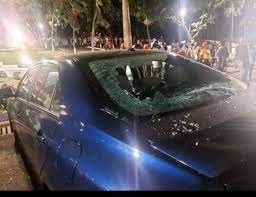 Conti locals made an effort to prevent their Katanga counterparts from using their façade in a procession.

Residents of Katanga objected to their conduct, which resulted in a fight.

The notorious student rivalry between Conti and Katanga led to stone-throwing, property vandalism, and the destruction of cars parked in front of Conti.

Three automobiles were damaged as a result of the fight, and other students were hurt in varying degrees.

The two Halls were able to get along again thanks to the presence of police officers.

In the interim, the Ashanti Regional Security Council issued a press release urging students to refrain from acts of lawlessness, maintain composure, and assist the security organization in managing the crisis.

In part of the statement, it was stated that “The REGSEC is informing all students and residents of the university community that, all actions intended by any person or group of persons to disturb the current peaceful security in the university will be addressed with the legal instrument of the state.”

The statement said, “It is recommended that those harboring such intentions refrain from doing so and abide by the law as any disturbance of the peace in KNUST and the surrounding will be adequately addressed.

Read the REGSEC letter below: 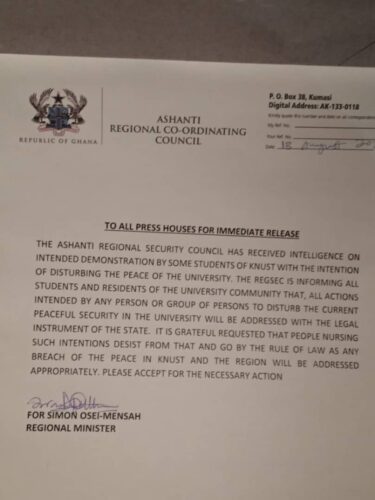