The Paramount Chief has the objective of supporting deprived communities with educational infrastructure and helping to restore the depleted forest in the area.

The joint project between the Paramount Chief, Tetreete Okuamoah Sekyim (ii) and AA Bonk Timber Company limited, a Timber company in Wassa Amenfi East did the handing over at the Chief’s Place on Thursday, 18th August, 2022, to give to the school. 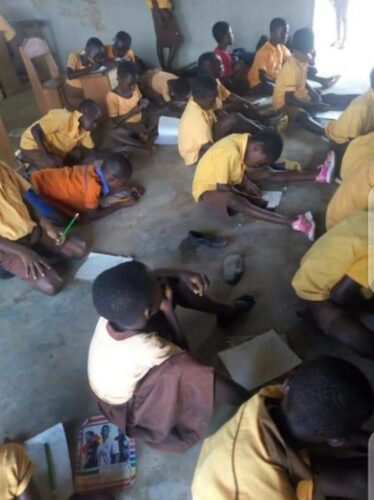 The Paramount Chief hinted that the CEO of AA Bonk Timber Company, Madam Akua Afriyie identified the challenge of the school as pupils sat on the bare floor to read and write, a story that was subsequently published in the media.

The Paramount Chief who doubles as Board Chairman for Forestry Commission, told freelance journalist Nana Kwame Boah that, the story came to him as shocking adding that he never thought of such shameful phenomenon could exist in his Traditional Area.

Notwithstanding, Tetreete Okuamoah Sekyim (ii) charged the school authorities to put the furniture in good use and ensuring maintenance culture to serve its purpose for the school.

The chief again urged the students in his Traditional Area and the Western Region as a whole to embrace education to shape their carrier so that, they can also use their educational power to help explore human capital and the natural resources in the region.

The headteacher of the Wuratrem primary school, James Amuah expressed gratitude to the Paramount Chief and the Chief Executive Officer for AA Bonk Timber Company Limited for the support and called on other philanthropists to do same

According to the headmaster, the Wuratrem M/A basic school has a population of over 600 pupils and has no tables and chairs to sit on during class hours, making teaching and learning difficult for both teachers and the pupils of the basic school therefore, the donation will go a long way to ease the challenges.