A lion murdered a middle-aged guy at the Accra Zoo who was thought to be in his thirties.

The intruder, who managed to climb the zoo’s security fence, was reportedly discovered roaming about the property on Sunday around midday, according to the Forestry Commission.

The unidentified intruder, who is thought to have been trying to take a cub, was pounced upon by the lions and later devoured.

Authorities revealed that the burglar was attacked and hurt “inside the inner fencing of the enclosure” in a statement released by the Forestry Commission.

He eventually suffered injuries as a result, which caused his premature death.

His body was afterwards placed at the mortuary.

The lioness and the two cubs, according to the Forestry Commission, “remain protected in the enclosure at the Accra Zoo.”

No lion has escaped from the zoo as a result of the event, the Commission emphasized. 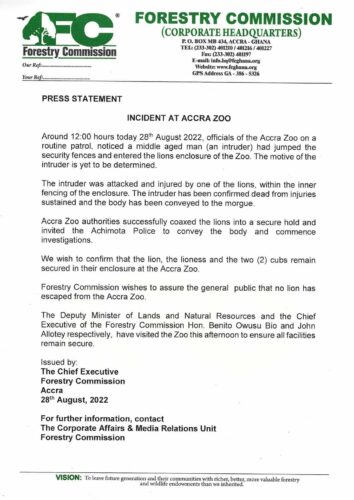 Following this incident, Benito Owusu Bio, the Deputy Minister of Lands and Natural Resources, and John Allotey, the chief executive of the forestry commission, visited the zoo to make sure that “all facilities remain secure,” according to the statement.