The Board of the National Cathedral of Ghana has responded to the most recent claims made against Rev. Victor Kusi Boateng, the board’s secretary, and a board member.

Dr. Paul Opoku Mensah, the Cathedral project’s executive director, has described how 2.6 million cedis was paid to a private business, JNT Talent Centre Limited, and then recorded in official paperwork as Contractors Mobilization.

He clarified to Joy FM in Accra that the Board Secretary just assisted the board in obtaining an interest-free loan to enable them to fulfill contractual commitments at some point in 2021.

“We had signed a contract, we were supposed to pay them (contractors) mobilization and that was part of the seed money from the state, and the state had actually transferred the money to the Minister of Finance but the Controller (and Accountant General) had asked for some time to pay it.

“We had already kind of postponed this payment to the contractors, so, a board member said he could help us top-up because he had some money we could just top it to pay the contractors,” Dr Opoku explained.

He claimed that this transaction happened in April 2021, despite the Controller’s assurance that the appropriate transfers would be made to the Cathedral Secretariat by September 15.

He said, “26th August 2021, we issued an official letter requesting that this is a crisis scenario, I can offer you simply this top up, there is no interest, nothing,” stressing that the required paperwork had been assembled for the deal. 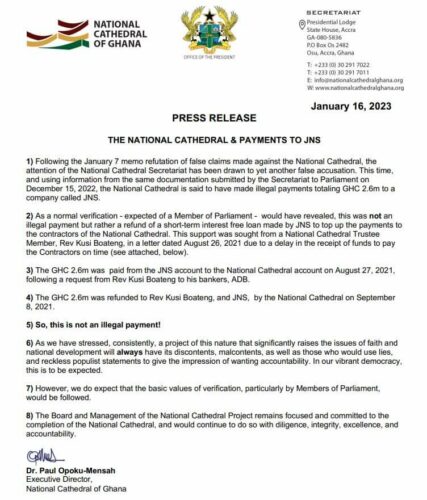 The MP, who has taken a zealous interest in the National Cathedral project, particularly with regard to the use of public funds for its construction, accused the board secretary of engaging in criminal activity in connection with the payment of GH2.6 million cedis to JNT Talent Centre Limited, a business he is closely affiliated with.

According to Ablakwa’s research, Reverend Kusi Boateng, who has reportedly been using a false name, was the same person as Kwabena Adu Gyamfi, who is identified as a director of the corporation that got the money from the Cathedral.

The cathedral construction project has been dogged by disputes over the amount of tax money allocated for it.

According to information provided to Parliament by the Minister of Finance, Ken Ofori-Atta, the government has invested a total of GH339 million on the facility.

A GH80 million allocation in the 2023 budget was forced to be changed by the minority in parliament due to concerns about the lack of accountability with regard to previously spent money.