The National House of Chiefs president, Ogyeahohoo Yaw Gyebi has emphasized the danger galamsey poses to the nation’s ability to mobilize income and the significance of the government’s participation in the fight against the threat.

The National House of Chiefs has stated that it supports the efforts of the Akufo-Addo-led administration to punish those involved in unlawful small-scale mining (galamsey) throughout the nation with the proper measures. 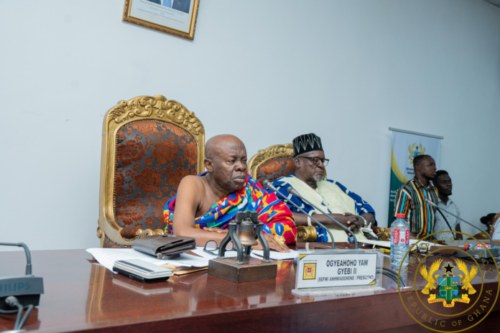 The President of the National House of Chiefs, Ogyeahoho Yaw Gyebi, emphasized the detrimental effects of illegal mining on the environment during a meeting President Nana Addo Dankwa Akufo-Addo held with Chiefs on Wednesday, October 5, 2022, in Kumasi.

Ogyeahoho Yaw Gyebi also emphasized the importance of the government’s participation in the fight against the threat that galamsey poses to the nation’s ability to mobilize money.

“Mr President, your relentless war against forest degradation and illegal mining in Ghana is of great importance to Ghanaians”.

“The effects of illegal mining on the environment threaten the survival of water bodies, farmlands, cocoa industry and even encouraging school dropouts [and] this undermines the revenue mobilisation drive in the country” he added.

“In view of this development, Nananom are solidly behind your administration to apply the appropriate sanctions against persons who are engaged in the practice of illegal mining irrespective of their status” he concluded.