The National Elections Committee of the New Patriotic Party (NPP) today organized the balloting for the position of candidates as they will appear on the notice of poll on the ballot paper.

The Electoral Commission (EC) of Ghana supervised the balloting behind closed doors at the Party’s headquarters today.

The Director of Elections and Research Mr Evans Nimako in an interview with the media disclosed that 52 aspirants picked forms to contest for various positions but 4 persons stepped down so their monies have been refunded to them.

Mr Nimako said the exercise was successful, adding that the Party would soon release the Notice of Poll and commence the printing of the ballot, Party would also release the voters’ album to all the aspirants by June 29, 2022.

The NPP’s national executive elections is scheduled to take place at the Accra Sports Stadium from July 15 to 17, 2022.

With the General Secretary position a total of six aspirants are contesting and incumbent John Boadu occupying the 1st on the ballot followed by Iddrisu Musah popularly known as Musah Superior, Ramseyer A. Agyemang-Prempeh,Charles Bissue,Fredrick Opare Ansah the former Member of Parliament and Lawyer Justin Frimpong Kodua popularly known as the JFK occupying the 6th position on the ballot sheet.

Read the statement issued by the National Elections Committee secretary and the Director of Research and Elections below: 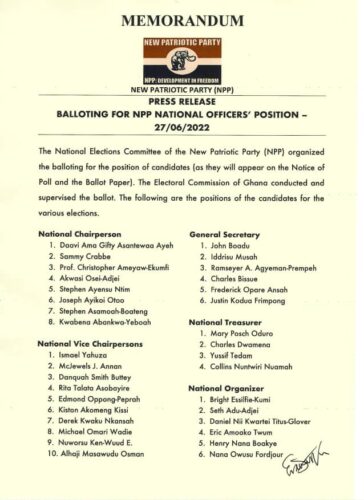 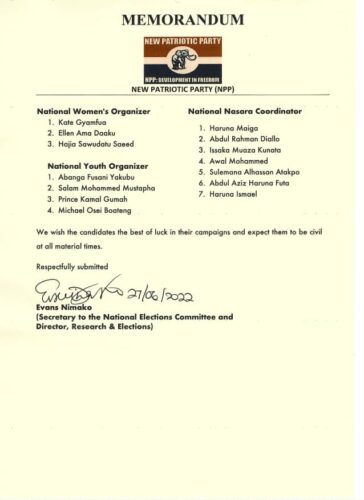