On December 29, 2022, a sizable crowd of the ruling New Patriotic Party’s (NPP) supporters gathered at the party’s headquarters at Asylum Down in the Greater Accra Region to pray for a stable cedi in 2023.

The party stated, “We want the cedi to be stable against the dollar in 2023.”

In her speech at the “Thanksgiving” event held under the patronage of Vice President Dr. Mahamadu Bawumia, the party’s national women’s organizer Kate Gyanfuah stated that the celebration’s goals were to pray for the president and ask God to intervene for the plummeting cedi. 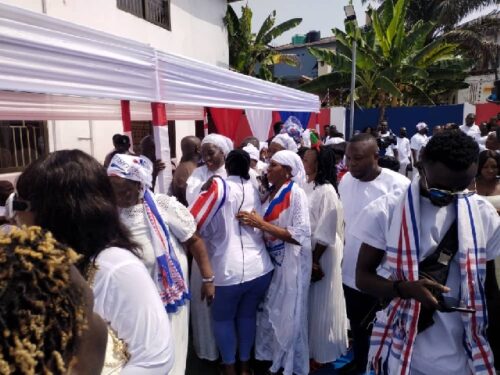 According to her, “This a gathering to take stock and pray for appointees of the government [and] Members of Parliament (MP) to keep the ideals of the party going into the 2024 general elections.”

The National Executive Committee of the NPP resolved to commemorate every last Wednesday of the month as a “National Prayer Day” to seek the Lord’s face for the party, according to Justin Frimpong Kodua, the party’s general secretary, who gave the welcoming speech.

He claims that all of the regional and constituency offices, as well as the party’s national headquarters, would mark the day.

He said that this was done as a way to thank God for the party’s progress to this point.

“We did it with the face of God in 2016 and we backslid because complacency set in as we got into government in 2020,” he confessed.

The Vice President and his spouse, Akosua Frema Opare, Director-General of the National Lottery Authority (NLA), Sammy Awuku, and Atta Kyea, MP for Abuakwa South Constituency in the Eastern Region, all attended the occasion.