The National Executive Body of the New Patriotic Party (NPP) has urged its supporters and all interested parties to maintain composure as they work to settle the problems involving Finance Minister Ken Ofori-Atta and Hon. Charles Adu Boahen, Minister of State at the Finance Ministry.

In light of the aforementioned situation, the party leadership is now engaging both the government and the parliamentary group, and it is urging all parties to maintain their composure as it looks for a peaceful way out of the deadlock. 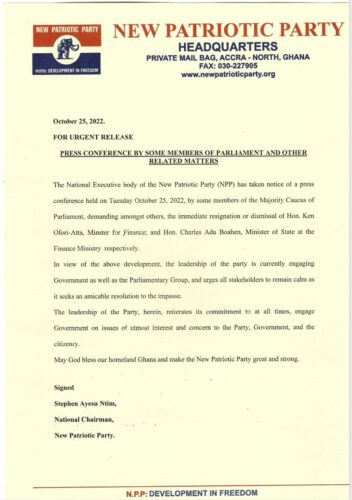 If President Akufo-Addo does not remove Finance Minister Ken Ofori-Atta and Minister of State at the Presidency Charles Adu Boahen from their roles, the Majority Caucus in Parliament has threatened to boycott legislative sessions.

Lawyer Andy Appiah Kubi, a member of parliament for Asante Akyem North, stated during a press conference on Tuesday that the two should be fired for their failure to address the current economic issues.

The New Patriotic Party members of parliament who want Finance Minister Ken Ofori-Atta dismissed from office are due to meet with President Nana Addo Dankwa Akufo-Addo.

According to sources, the meeting will take place tonight, Tuesday, October 25, 2022.

The NPP MPs claimed that their attempts to get the administration to address the problems facing their constituents’ struggling economy had been ineffective.

Thus, on Tuesday, October 2022, they convened a news conference to express their unhappiness and seek the resignation of Charles Adu Boahen, the Minister of State for the Ministry of Finance, and Ken Ofori-Atta.

The dissatisfied Majority group’s spokesperson, Andy Kwame Appiah-Kubi, who represents the Asante-Akim North Constituency in parliament, stated to the media on Tuesday that the dismissal of Ofori-Atta and Adu Boahen will assist boost confidence in Ghana’s economy.