Police have detained Nana Clark Onyaa, the chief accused of working with a pastor to kill and bury a student nurse at the age of 25 in his Mankesim kitchen.

When he learned that his conspirator had been detained, the Tufuhene of Ekumfi Akwakrom fled.

But Nana Clark Onyaa was pulled up at the residence of his girlfriend in the Ekumfi Akwakrom Hilltop.

According to information acquired by the media, Nana Onyaa and the Pastor, who is also the lover of the deceased’s sister, kidnapped the woman and then demanded Ghc15,000 from her family before releasing her. 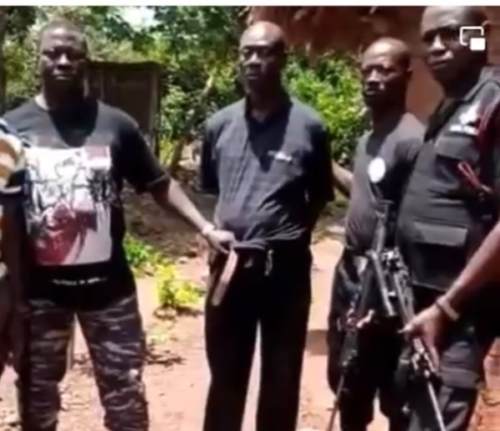 The Chief and the Pastor allegedly killed the woman and buried her within the Chief’s Kitchen for ritual purposes when the family failed to make the required payment, according to the police.

The pastor was previously detained at Cape Coast after telling police about the crime, and the police then followed him to the chief’s residence.

Her bag, shoes, and other possessions were taken from the chief’s home along with the body.

For preservation and an autopsy, the body has been placed in the mortuary at Cape Coast Teaching Hospital.

Chief Superintendent David Gyabaa, the Central Regional Crime Officer, confirmed the arrest and stated that both suspects are currently being held by regional police and supporting the investigation.

Residents are in a state of shock and fear as a result of the tragedy.

The Assembly Member for the region, Hon. Cephas Authur, urged the Inspector General of Police to increase security in the Mankessim and its surroundings in an interview with the media.

He claims that this is the fifth occurrence of this kind of incident in Mankessim this year.

The Assemblyman demanded that the chief and the paster be prosecuted and, in the event that they are proven guilty, harshly punished by the law to serve as a deterrence to others who have such nefarious objectives.

The victim’s body has been placed in the mortuary of the Cape Coast Teaching Hospital for preservation and autopsy.