The senior staff association-Universities of Ghana (SSA-UoG) has declared that its three-week strike in protest of its demand for a 20 percent cost-of-living allowance will be put to an end (COLA).

The group has also been claiming, among other things, how the government’s failure to pay Tier 2 pension arrears forced them to leave the lecture halls.

The KNUST basic schools and other public institutions’ academic and administrative operations were impacted by the strike.

The SSA-national UoG’s secretary, Hector Owoahene Acheampong, informed the media that the strike will be suspended for the upcoming month in order to facilitate discussions with the administration.

“We made a deal with the administration that we would see to it that all other concerns are resolved within a month.

Therefore, the plan is for the strike to be put on hold; it won’t be called off totally, according to Acheampong.

In order to address all of the issues, he stated, “We are only suspending it for a month at a time. In between, we are going to have dialogues with the government.”

All public sector employees will begin receiving a 15% cost of living allowance (COLA) from July 1st 2022, as agreed upon by the government and organized labor in mid-June.

The agreement states that “all industrial actions and threats of same will be immediately canceled and that all labor unions will resume work immediately.”

This comes after three days of talks between the administration and the unions since the COLA demand began.

The effective date of the Cost of Living Allowance (COLA) payment is July 1, 2022, according to Ignatius Baffuor Awuah, Minister of Employment and Labor Relations, who made the announcement during a press conference on Thursday. 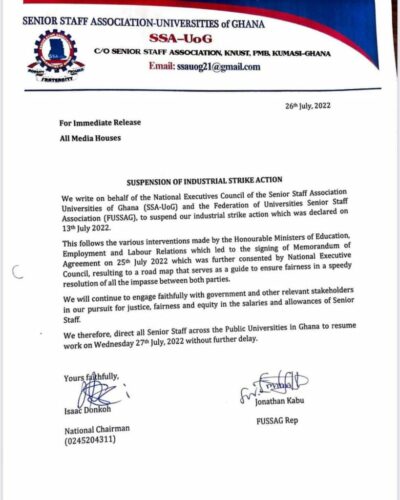 Previous In a 5-2 decision, the Supreme Court rejects the Assin North MP’s review
Next Police refute the GSS, CHRAJ, and UNODC surveys as most corrupt organization.