To tackle crime, the newly constructed police station in the Wassa Afransie community has received considerable donations from Hon. Nicholas Amankwah, the Member of Parliament for the Western Region’s Wassa Amenfi East Constituency.

On Thursday, July 21, 2022, the presentation was made during a brief ceremony to commission a new police station in the Afransie neighborhood.

The MP claimed it was his personal contribution to the station’s smooth operation and provision of the region’s residents with the security they so much required.

The Chief of Wassa Afransie, Nana Amua Gyaafo, constructed an ultra-modern police station with the intention of improving policing in his neighborhood and other nearby places. 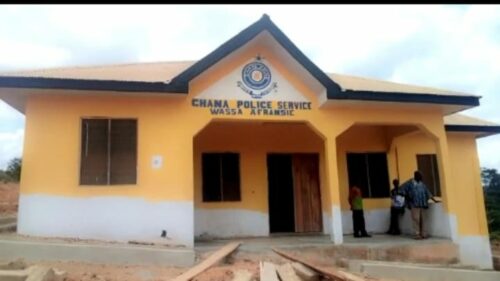 At a brief commissioning ceremony, the first term member of Parliament presents a brand-new motorbike and gh¢2,000 cash to complete the police bungalow. 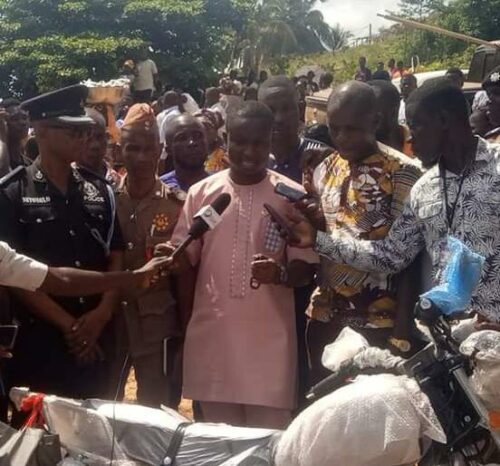 He, therefore, called for community support through credible and timely information to lead to arrest of criminals.

However, the MP reiterated his call on the Western Regional Minister who doubles as Chairman of the Western Regional security council, Kwabena Okyere Darko Mensah for more resources for Amenfi East Police to combat crime, saying that peace, stability and prosperity in Amenfi remain an absolute priority for the residents.

Hon. Nicholas Amankwah lauded the Chief and the residents for their enormous contribution to development and policing in Wassa Afransie community.

Nicholas Amankwah was hopeful that the new edifice would enable the police to discharge their duties more effectively and efficiently.

The MP commended the district police officers for protecting lives and properties despite their limited resources meanwhile, he pledged to continue to invest in the police service in his constituency for the benefit of its residents.

He said the Wassa Amenfi East Municipal is becoming an industrial hub and, therefore, needed such an edifice to improve efficiency and performance in crime prevention and protecting lives and properties.

He described the location of the police station as very strategic because Wassa Afransie and several other towns within the Wassa Amenfi East was living in fear over frequent armed robbery attacks.