“We are not defending Aisha Huang” – Freddie Blay

Freddie Blay, a former national chairman of the ruling New Patriotic Party (NPP), has defended his choice to represent foreign nationals accused of indulging in galamsey, or illegal mining, in court.

The NPP stalwart’s action, according to critics, undermines the government’s efforts to combat the threat that has ruined numerous water bodies and forest reserves.

Because the infamous Chinese galamsey queen is also being represented in court by Captain Rtd. Nkrabea Effa Darteh, a former deputy interior minister and NPP member, the NPP has come under heavy assault.

Four people who have been accused are being represented in court by our firm.

There are no accomplices because they have each faced separate accusations in court.

We are not Aisha’s supporters, and it is impossible to claim that they are her accomplices because they are unrelated to her.

Anyone who conveys that impression is therefore mistaken.

Mr. Blay expressed surprise at the negative response from the general people. 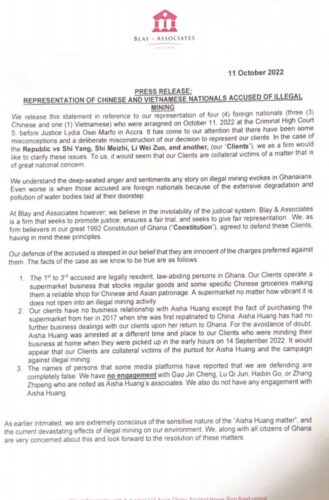