George Mireku Duker, the mp for Tarkwa Nsuaem, has refuted claims that his bodyguard was slain at a location for illicit mining (galamsey).

On Friday, several news websites said that Mr. Duker’s bodyguard, who was allegedly shot to death by three Chinese nationals who have since been detained, was also the deputy minister for lands and natural resources.

However, Mr. Duker stated in a statement that he only has one bodyguard that has been assigned to him by the Republic.

My bodyguard, a Ghana Police Service officer, is still alive.

I have never had a bodyguard with the name listed in the article, and I don’t have any other bodyguards elsewhere.

“The publication going round is not only misleading and fake but defamatory as my detractors will not stop at anything just to tarnish my hard-won reputation. In their scheme to cause massive damage to me they have linked a person whom I have no connections with whatsoever with intent to subject me to public ridicule and hatred, reduce my estimation in the eyes of right-thinking members of the public, scandalize and embarrass me beyond measure.”

Mr. Duker pleaded with the public to ignore the article because neither he nor his bodyguard had any connection to the named accused individual.

Adding that he has forwarded the problem to his attorneys for the required legal steps, he encouraged media outlets that had published the news item to retract the publication right now and provide an apology within 48 hours, failing which they risked legal repercussions. 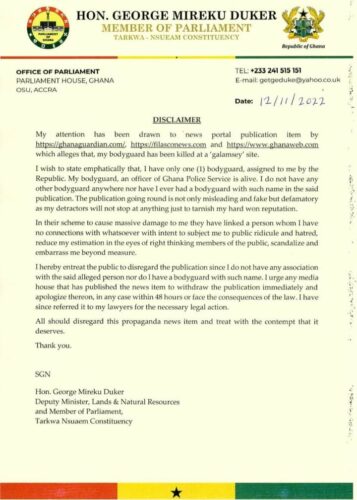