Man kills himself after killing his wife

After killing his wife, Ofori Boateng, 53, hanged himself in a bush in Kota, a neighborhood of Berekum in the Bono Region, leaving the community in shock and sadness.

Report reaching Ghanatodayonline.com indicates that, the couple, who share two children, had been cohabitating quietly before the man, who was reportedly well-to-do, started engaging in promiscuity.

His 33-year-old wife Ama Mary became concerned about his behavior and repeatedly urged him to stop the behavior, but he did not budge.

She complained to her husband’s relatives about her concerns regarding her husband’s behavior, and two meetings were organized to discuss the subject.

However, the man continued to make advances toward other women.

Ama Mary, unable to tolerate her husband’s questionable behavior, made the decision to report the incident to her pastor so that he might compel her husband to behave.

When Ofori Boateng accepted the Pastor’s invitation, he forewarned the man of God to stay away from his marital problems or else he would kill the Pastor and then commit suicide.

Ama Mary fled her house and spent roughly three months with her relatives as a result of Ofori Boateng’s immediate threat to kill his wife.

Ama Mary accepted Ofori Boateng’s petition to return to their marital home and beg for forgiveness when he went back to her about two weeks ago.

She had no idea that Ofori Boateng was still plotting to murder his wife; on Monday morning, he shot her at close range before running away.

She was taken urgently to the Holy Family Hospital in Berekum, where doctors later declared her dead.

Ofori Boateng afterwards called a member of her wife’s family and admitted to killing her. He also said he was going to commit suicide and provided the location where he would be hanging himself. 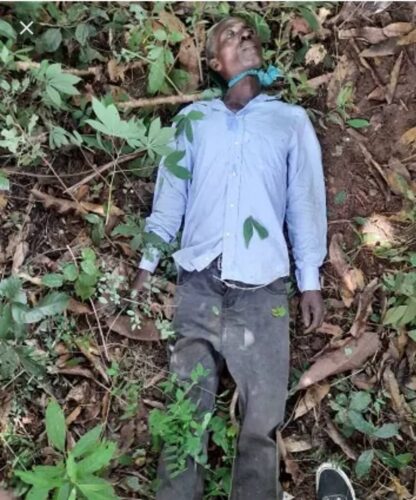 When Ama Mary’s family members arrived at the scene, they saw Ofori Boateng dead and hanging from a tree.

After the police got on the scene, they transported the body to the Holy Family Hospital, where they are also keeping the body of his wife.

Ama Mary was going to bury her mother on Friday when she unexpectedly passed away.