The Chief Executive Officer (CEO), Nana Appiah Mensah, also known as NAM1, of the defunct gold-trading company Menzgold Ghana Limited, has denied holding a service passport, according to the Ministry of Foreign Affairs and Regional Integration.

This comes after media reports that the former Menzgold CEO may possess a Service passport.

The publication was labeled “blatantly untrue” by the Ministry.

NAM1 does not possess a Service Passport, according to the Ministry, but rather a regular passport.

The Ministry officially acknowledged that “the Passport Office has not given any Service Passport to the person [NAM1] in question” in a Facebook post on August 29, 2022.

“Checks from our system reveal that NAM 1 only owns an ordinary passport, which was issued in Accra by the Passport Office,” it was emphasized.

Therefore, the general public must dismiss the aforementioned publication because it is obviously incorrect. 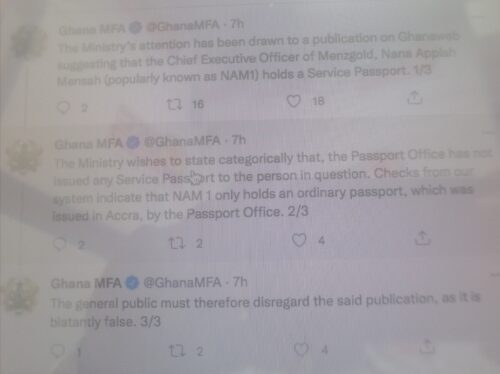