Richard Ahiagbah, formerly the executive director of the Danquah Institute, has been named director of communications for the ruling New Patriotic Party (NPP).

Prior to his latest assignment, Mr. Ahiagbah, who has a solid expertise in policy research, legislative lobbying, and regulatory reform, held the position of Deputy Director of Research in the Jubilee House Office of the President.

In 2012, Richard Ahiagbah worked as a field organizer for former US President Barack Obama.

In American senatorial and gubernatorial elections, he has also taken on similar duties.

He served as a legislative liaison for Oneok Hydrocarbons in the US and the Fiscal Policy Centre before being hired as the executive director of the Danquah Institute.

The NEC further appointed the following persons to serve as Directors of the Party at the National Secretariat:

DIRECTOR OF FINANCE AND ADMINISTRATION

DIRECTORATE OF RESEARCH AND ELECTIONS 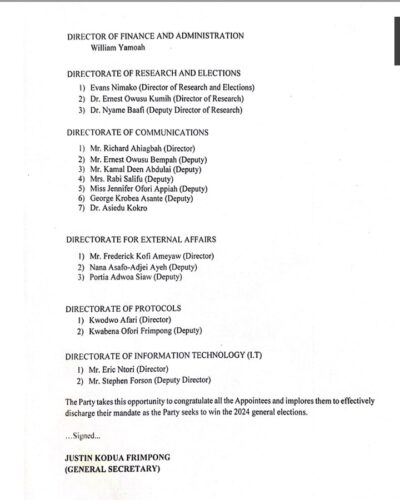