Colonel (Ret.) Kwadwo Damoah has been fired from his position as commissioner of the Ghana Revenue Authority’s(GRA) customs division by President Nana Akufo-Addo.

The instruction was stated in a letter from the Presidency that was signed by Nana Bediatuo Asante, the President’s Executive Secretary.

“The President thanks you for your service to the state and wishes you well in your future endeavours”, the letter concluded. 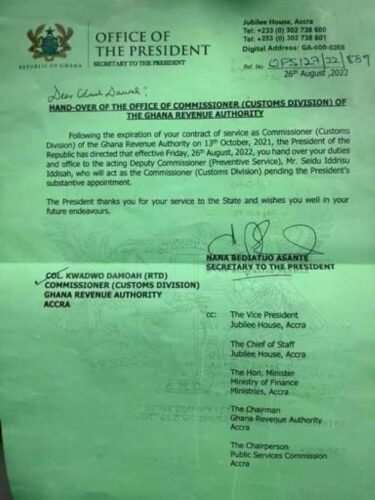 In recent weeks, Col. Kwadwo Damoah (Rtd) has made headlines due to the Special Prosecutor’s investigation into Labianca, a foreign food importer that raised suspicions of irregularities at the port.

According to the report, the owner of Labianca had gotten favors for her business while serving as a board member of the Ghana Ports and Habours Authority (GPHA) at the time.

The OSP also issued a citation to Joseph Adu Kyei, a Deputy Commissioner of Customs in charge of Operations, for issuing what it deemed to be an illegal customs advance ruling.

Col. Kwadwo Damoah (Rtd), who spoke at the Customs Division Management retreat in Kumasi, argued that the Special Prosecutor’s report was issued with malicious purpose.

The OSP “is trying to indict the deputy and myself,” according to Col. Damoah (Rtd), who also claimed that it was intended to discredit the Customs officials.

It’s unclear, though, whether the President’s order had anything to do with this.